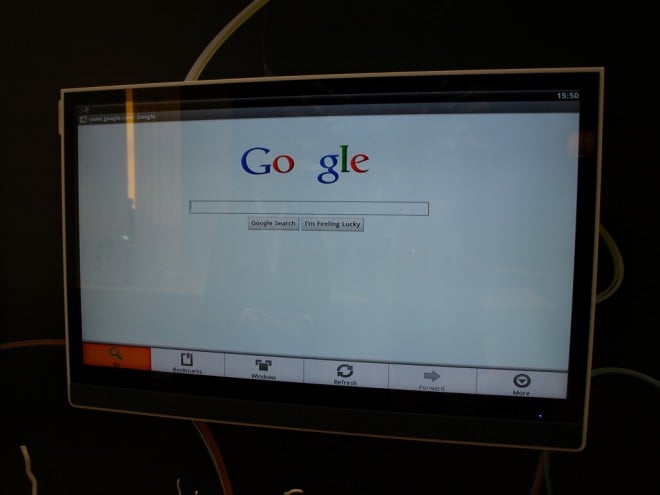 Google, Sony, and Logitech may be hard at work to polish Google TV and launch it in time for the 2010 holiday shopping season, but that hasn’t stopped a lesser-known TV maker from Scandinavia from putting the Android operating system on their latest range of flat-screen “boob tubes”. The Lava Scandinavia TVs, from People of Lava, aren’t official “Google TV” products, but they’ve managed to extensively customize the Android operating system to merge the standard television interface with what is the best “Internet TV” experience that we’ve yet to see. They call it an “Android TV” and it’s billed as a “world’s first” in its own right. We managed to get an impressive demo from these folks at IFA 2010 Berlin, and thought you’d be interested in seeing the tech in action. Keep reading!

The Lava Scandinavia TV lineup is an interesting hybrid of low-power computer and traditional TV. Inside the wall-mounted gadget you’ll find a standard television hardware, but you’ll also find an additional logic board that’s tasked with serving up an Android-based Internet TV interface. For the purposes of this hands-on review, we’re going to focus on just the Android portion of the tech. 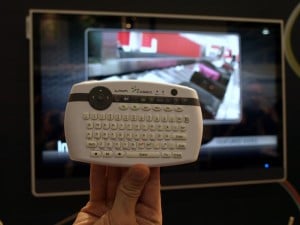 When you fire up the TV, you land on what looks like a traditional Internet TV homescreen filled with Android widgets that pull down information like weather, stocks, and the like. That’s not really anything new. But, hit a key on the QWERTY keyboard/remote and you’re taken to a more feature-rich “home menu”. From there you can launch the web browser, YouTube, Facebook, Email client, other Android apps, the proprietary App Market, and Settings.

The web browser is your standard webkit-based Android web browser, which is darn good in our book. The browser allows you to zoom and pan around a webpage using the directional keys on the remote, or via a mouse cursor mode. And, because text on a webpage can be hard to read at distance, People of Lava have ensured that text on the page re-scales to larger font when you zoom into the page. You can even browse multiple webpages at once, via browser tabs.

The Facebook app on the TV is basically the same as the Facebook app that you’ve come to love on your Android smartphone. The interface is stretched to fit the 42-inch, 47-inch, and 55-inch screen sizes, but the app is otherwise the same. That’s a good thing. 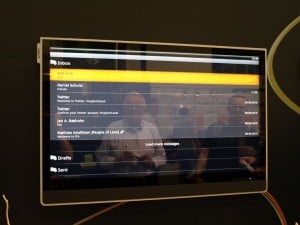 The YouTube app is highly customized. It looks nothing like the standard Android YouTube app, although it does make use of the same APIs used in smartphones. It’s everything you expect from the video-streaming service. If we have to explain YouTube to you in any more depth, then you’re probably nowhere close to the target demographic for this TV, so we’ll leave it at that. What’s cool here is that the videos look surprisingly good on the large screen. We expected all kinds of pixelation and crappy video quality, but that was thankfully not the case.

Unfortunately, the email client is the stock email client that’s included in the Android 1.5 Cupcake operating system. The folks at the booth tell us that software updates will be made available via over-the-air updates in the future, but for now, you’re stuck with the clunky email client that early Android adopters have grudgingly dealt with in the early days of the mobile OS. Still, it’s good to have full email capabilities on the TV.

The App Market is a proprietary People of Lava creation. The number of apps in the store are limited at this point, but the company says they are actively reaching out to Android devs to optimize their apps for the TV. Our demo TV actually had a Seesmic app installed. If you’re looking to install the latest apps on this TV, you might want to wait for Google TV.

While Google goes on and on about how “open” they are and how they don’t want to be “evil,” the search engine giant has gone and hand-picked a group of select companies to work with them on the first generation of Google TV and Android tablets. In the process, Google has left smaller companies locked out of the elite few that are blessed with the full support of Schmidt & Co. Sure, Google can do whatever they want — they are their toys, after all — but the whole “open” and “free” mantra starts to sound a little ingenuous at this point. It’s because of this double-standard that we applaud PoL for their work on the world’s first Android TV.

There's no question that Android tablets were the most interesting devices to come out of IFA 2010 Berlin - and...