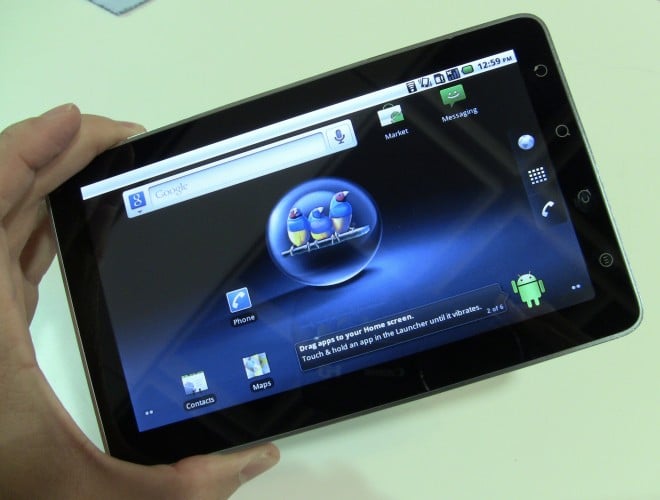 There’s no question that Android tablets were the most interesting devices to come out of IFA 2010 Berlin – and the Android 2.2 Froyo-powered ViewSonic ViewPad 7 tablet is one of the best of the bunch. It might not have the largest display, or the highest-resolution, or the most feature-packed specs-sheet, but the ViewPad 7 is just about as good an Android tablet as we could hope for. It may not be as good as the Samsung Tab, but the ViewSonic Android tablet is one spiffy piece of kit. We had a chance to put our hands all over the gadget that’s crafted mostly of glass, and we have some HD video to show you what the tablet looks like in real life.
The ViewSonic ViewPad 7 sports similar dimensions to the Samsung Tab. The ViewPad 7 features a 7-inch capacitive touchscreen and a slim(ish) profile that’s just as easy to handle in one hand as the Tab. In fact, the smaller display gives the underdog tablet a more portable form-factor that’s almost small enough to fit in a pocket (emphasis on almost) – it makes the iPad seem almost unwieldy.

It’s powered by a 600Mhz Snapdragon processor, backed up by 512MB of RAM, which is enough to make the Android 2.2 Froyo OS run fairly smoothly. The ViewPad 7 can accept SIM cards to enable 3G data connectivity (HSPA) and even make phone calls. You can use the built-in microphone and speakers to make calls, but we’d suggest you go the headset route. The tablet also boasts WiFi, GPS, Bluetooth, and a microSD card slot that can support up to 32GB memory cards. Unfortunately, the ViewPad 7 spits out just 800×480 pixels, compared to the Tab’s 1024×600 screen resolution.

Now, if you’re a fan of the iPhone 4’s industrial design (and really, who isn’t?), you’ll dig the look of the ViewPad 7. The mostly glass design aesthetic looks like it could have come straight out of Apple’s Cupertino headquarters, with capacitive touch navigation buttons keeping the front face of the device uncluttered and slick. The smaller, 7-inch touchscreen makes the ViewPad a true one-handed device, although we could have done with a slightly slimmer waistline.

And, while one-handed operation is convenient, the smaller form-factor makes thumb-typing on the ViewPad 7 as easy as pie – a pie that serves up a rejiggered keyboard for when you’re holding the tablet in both hands. Although, we wouldn’t recommend trying to type on the tablet in landscape mode with all ten fingers – this is where the iPad’s larger size comes in handy.

With Android 2.2 Froyo on tap, this is one tablet that won’t disappoint even the hardest core Android fans. ViewSonic didn’t bother with any custom Android skins, opting instead for the vanilla Android experience. We like that. You get full access to the Android Market, which means the ViewPad 7 will play nice with just about every Android app out there. Froyo is also optimized for speed, which is a good thing, since the 600Mhz processor showed signs of being taxed to the max at times. If you’re looking for outright speed and performance, you may have issues with the slower clock speed – the 1Ghz ARM Cortex A8-based processors in the Samsung Tab and Apple iPad will run circles around the ViewPad 7 all day long. The Quadrant benchmark, although considered more unreliable than reliable these days, that we ran on the ViewPad was abysmal (check out the photo gallery to see for yourself). Still, most users probably won’t have any complaints.

We’re looking at an October launch of the ViewPad 7 in Europe, unlocked and contract-free – something we can’t say for the Tab. We’re told that pricing should top out at 400 Euros, and will likely be offered at $400 USD when the tablet makes the jump to The States. Not a bad deal, if you ask us. Especially since the device won’t be locked to any carrier and will offer 3G connectivity with any compatible SIM card.

In the end, the ViewPad 7 will be a worthy competitor to the Samsung Tab. It’s not as powerful as the Tab, is a bit thicker, and doesn’t support Adobe Flash 10.1 Player, but those are compromises you have to make for a cheaper price point. We really like it, but the Tab has a better chance of being an iPad killer, if that’s something you’re looking for in a tablet. Otherwise, the ViewSonic offering is an all-around solid performer.

Check out the video and photo gallery to see more of the ViewPad 7.

Android 2.2 (Froyo) for HTC Desire Pushed then Pulled by O2