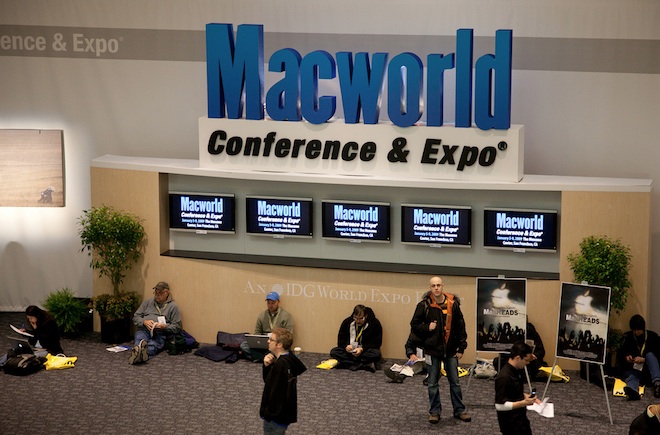 Macworld Expo, the event hosted by IDG World Expo that has traditionally been used by Apple to launch new computers, will be hosting their first ever Macworld Mobile event next February in conjunction with the GSMA’s Mobile World Congress. For those of you who haven’t been to Mobile World Congress, it’s an annual pilgrimage that every mobile phone fanatic has to do at least once in their lifetime. The sheer number of devices, applications and services announced during those few days are enough to make the grown men of the IntoMobile team cry of exhaustion from sitting at a keyboard for 12+ hours a day and then getting no sleep thanks to the corporate sponsored dinner and booze fest that takes place every night. The event is scheduled to take place between the 14th and 17th of February in Barcelona.

In addition to this news, the GSMA is also announcing that they have some additional keynote speakers: Daniel Hajj, CEO of América Móvil and Telcel, Peter Chou, CEO of HTC, and Vittorio Colao, CEO of Vodafone. They’re already joining the impressive list of previously announced speakers: Randall Stephenson, CEO and President of AT&T, Eric Schmidt, CEO of Google, Paul Jacobs, CEO of Qualcomm, and Evan Williams, CEO of Twitter.

More details about Macworld Mobile have yet to surface, but it’s designed to be a 1 day developer focused event. If you write applications for the iPhone or iPad, then you’ll want to at least pass through to see if you can learn some tips and tricks on how to make your fart application stand out from the other 500 fart applications in the App Store. Do me a favor and try not to get into a religious battle by mentioning other platforms, unless you plan on contributing to a discussion on how to best write your application to enable rapid cross platform deployment. At Mobile World Congress there are no fanbois, just business people who want to make money regardless of the platform that’s in vogue.

[Recommended Reading: Mobile World Congress 2010: I came, I saw, I walked away underwhelmed]

Ultrabrief: Mobile World Congress will not take place in Barcelona after 2012

Those of you working in the technology industry who are tired of paying out the ass for hotel rooms every...