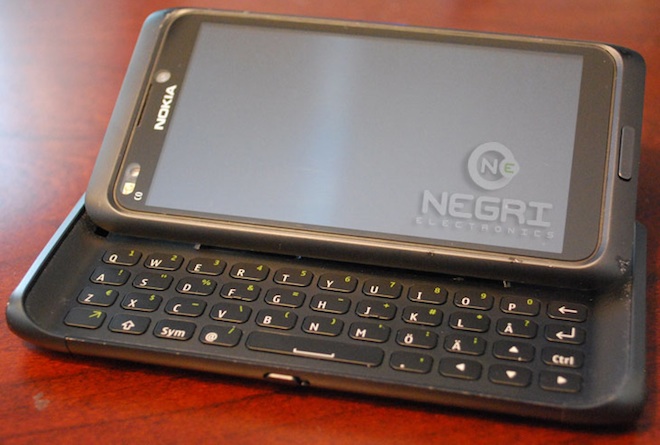 Nokia’s most important event of the year, dubbed Nokia World, will begin next week in London and sources who have spoken to Reuters say that the E7, along with other smartphone models, will be announced at the show. If true, and we have no reason to believe otherwise, then the E7 will become the first Eseries device to feature a touch screen and also the first to run Symbian^3. The photo above, leaked in June, is what people think the E7 will look like, but the design language is far too similar to that of the N8 for me to believe that.

One month later, in July, we got word that the E7 will be launched in the UK in November, along with the Samsung Cetus. A spec sheet was passed around that said the E7 is going to have a 4 inch screen, which if true is going to make it one of the biggest devices Nokia has ever produced.

Then there’s the “other smartphones”. Are we going to see other devices in the Eseries lineup get an upgrade? It’d be interesting to see if the Finnish firm can squeeze a touch screen and full QWERTY keyboard into a device with the same form factor as the famous E71. Are we going to see the N9, the first device based on MeeGo? Doubtful, there’s a dedicated MeeGo event in November. Are we going to see more cheap smartphones, i.e. devices that belong in the Cseries such as the C5 and C6? Hopefully.

What else is Nokia going to talk about? Their service strategy is on the minds of everyone in the industry, espeically after announcing that Ovi Files is going to be shut down and that Comes with Music is now called Ovi Music or Ovi Music Unlimited or some other thing that the marketing department is going to have to pour $500 million into just to get the public to remember the proper name.

India: Nokia is the most trusted brand for third year in row

The results of Economic Times-Brand Equity's annual "Most Trusted Brands" survey for 2010 in India are here and they say...