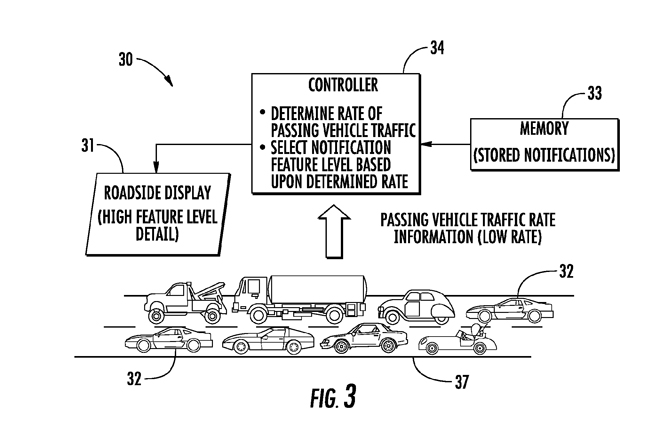 Some fresh patents from RIM give us an idea of what they could do with the anonymous location and speed data mined from BlackBerry users. Essentially, “adaptive pedestrian billboard system and related methods” and “adaptive roadside billboard system and related methods” enable digital billboards to change their behaviour based on the density of incoming traffic (either on foot or in the car). This ties in with RIM’s Dash Navigation acquisition which allows them to provide anonymous traffic information collected from the GPS unit on BlackBerry smartphones to developers. The only real change to the signs is the amount of visual details displayed, so that in slower conditions, the signs show more since the drivers can actually take the time to see it, while details are reduced when traffic is fast and drivers only have a sliver of time before the sign whizzes by. That relationship is inverted for pedestrians; crowded sidewalks make it harder to see things, so they simplify the signs for increased visibility.

With ideas like this, RIM could get some good mileage out of their acquisition of Dash Navigation. By tying in with billboards, RIM could enable advertisers to bid on billboard time in high or low density situations, for example.  It needs to be said that the world of patents is rarely an indicator of what manufacturers actually end up implementing, but it’s always interesting to see where their head is with emerging technology. RIM is already already using the location data for their own BlackBerry Traffic app, but what could third parties do with it?

A couple of videos that will be loaded on the upcoming BlackBerry Style 9670 clamshell have leaked, showing some basic...