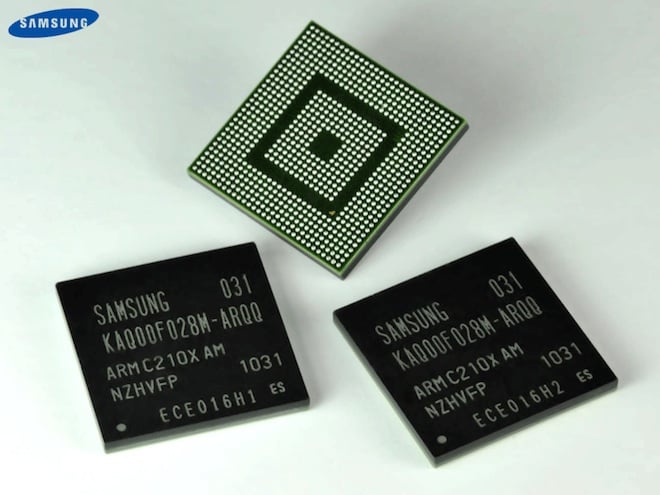 Samsung has just announced code name Orion, a 45 nanometer dual core ARM Cortex A9 application processor clocked at 1 GHz with a 5 factor increase in GPU performance compared to previous generation models. Expected to ship to select customers later this year, and begin mass production during the first half of 2011, Orion has support for HDMI 1.3a and can handle up to 3 screens at once, so go wild with you imagination when planning your next home theater system.

Clock for clock a 1 GHz Cortex A9 processor should be about 50% faster than today’s 1 GHz Cortex A8 processors thanks to the switch to out of order execution and a shallower 8 stage pipeline. Time will tell however when we’ll see these chips inside products that fit into our pockets. It was Apple who shipped the first Cortex A8 product with the iPhone 3GS in the summer of 2009, and it was Samsung who built the chip inside said smartphone. The jump from single core to dual core offers benefits such as smoother multitasking and increased battery life thanks to the ability to shut down individual cores.

It’s still early days, and ironically the only mobile operating system to officially support dual core ARM processors is Symbian. Nokia, with their reputation of being frugal with system specifications in order to pump up their margins, isn’t likely to produce a dual core Symbian device any time soon. The rumored Samsung Galaxy S 2 that we saw back in early July could potentially become a reality. The leaked spec sheet said it has a 2 GHz processor inside, but that could just as easily have been “2x 1 GHz processor cores” written on the documentation that the leaker shared with the internet.

Mobile World Congress 2011 is 5 months away, and if we don’t see devices announced that have dual core processors inside then I’m going to have a fit. It’s about time we got more horsepower.