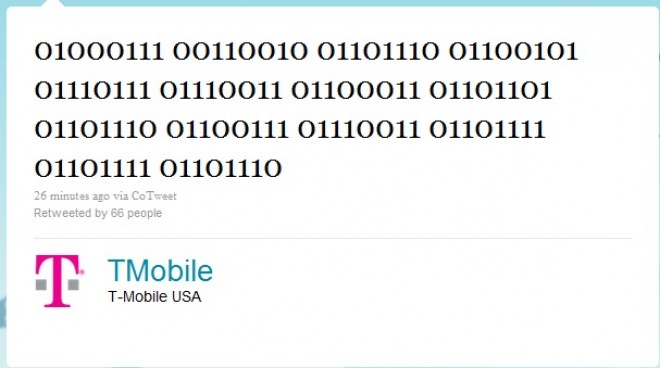 It’s nice when marketing on Twitter gets at least somewhat clever, and T-Mobile just got a little creative by tweeting a message about the T-Mobile G2 in binary code for us. It was easy enough to translate, thanks to the vast selection of binary translators online, and the message clearly reads, “G2newscmngsoon”. So hold on to your hats, T-Mobile is looking to soon share a few more details on their upcoming G2.

While we don’t know a lot about the T-Mobile G2, we still think we know a decent amount about the device. It will be a great follow-up to the T-Mobile G1, but may have some trouble competing the top Android handsets of today, just as the MyTouch Slide. What else could we learn about the device that we don’t already know? Well, a lot, but we don’t imagine we’ll learn anything too grand. Of course, we hope we’re wrong, but it’s not looking likely that the G2 will come with a front-facing camera or HDMI port. That sounds way too specific anyway.

What would be the best news is if Magenta gives us an official spec sheet of the device, or a shipping date for the G2. A ship date seems more likely than anything else, but we’re still iffy about the pending announcement. Another question is when T-Mobile will release this information, as “soon” could mean the next 2 hours, 8 hours, tomorrow. You get what we’re trying to say.

We have every reason to believe that the news could be something big, but at the same time, Twitter may not be the best way to announce something so big. Then again, it could be something as small as the G2 webpage getting the picture filled out where once it was just a white slab.

Who know what T-Mobile could be bringing us, but we’re hoping it will be worth the wait.

T-Mobile G2 Quick Keys are just what they sound like

The upcoming T-Mobile G2, the worthy successor to the world's first Android phone will sport some a couple of things...