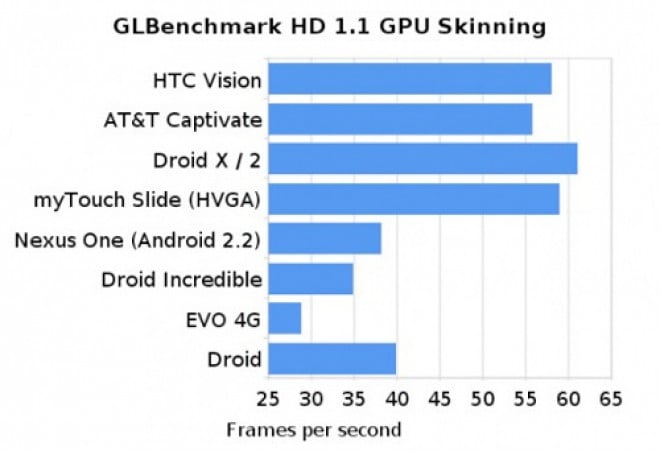 The T-Mobile G2 may not have the hefty specs other smartphones have today, but that doesn’t seem to mean that it will perform any worse than other powerhouse Android phones out on market already. Thanks to the new Qualcomm Scorpion CPU, the G2 performs as well as, and in some cases, better than the competition.

Thanks to the Qualcomm MSM7230 CPU, which includes a dedicated GPU, the Adreno 205, the G2’s performance should be comparable to that of the Samsung Galaxy S and the Droid X. According to Qualcomm, the Adreno 205 can increase the GPU performance four times over the previous Adreno 200, which was used in the first batch of Snapdragon handsets. The graph above shows just this, as we can see the device (HTC Vision) beat out the Samsung Captivate (Galaxy S), and barely trailing behind the Droid X and Droid 2. The MyTouch Slide is also pretty high up there, only because the display is HVGA.

So it seems that the T-Mobile G2’s processor running at 800MHz won’t slow down performance as much as had previously been feared, at least as far as graphics performance goes. The G2 won’t give too many Android smartphones a run for their money, but it should easily be able to run with the pack without falling behind. We don’t have to wait much longer before we get our hands on this thing, so we’ll have a more solid determination of raw performance in due time. There have been rumored launch dates for a September 29th debut of the G2, but according to TMONews, they are also hearing a launch date of October 6th as well.

The G2 will be the US’ 2nd phone to ship with Android 2.2, and though the Droid 2 was the first, we’re excited to see how fast the G2 performs since it has no custom skin running on top of it. The G2 will also likely one of the go-to devices for Android hackers, as it’s similar to the Nexus One since its running stock Android, which may lend to an easier rooting and modding experience. Those of you who are still worried about the 800MHz clock speed, would you care less if it was overclocked to 1GHz?

Some nice-looking Google Voice widgets were ripped out from a leaked ROM a few weeks ago, and they've now gone...