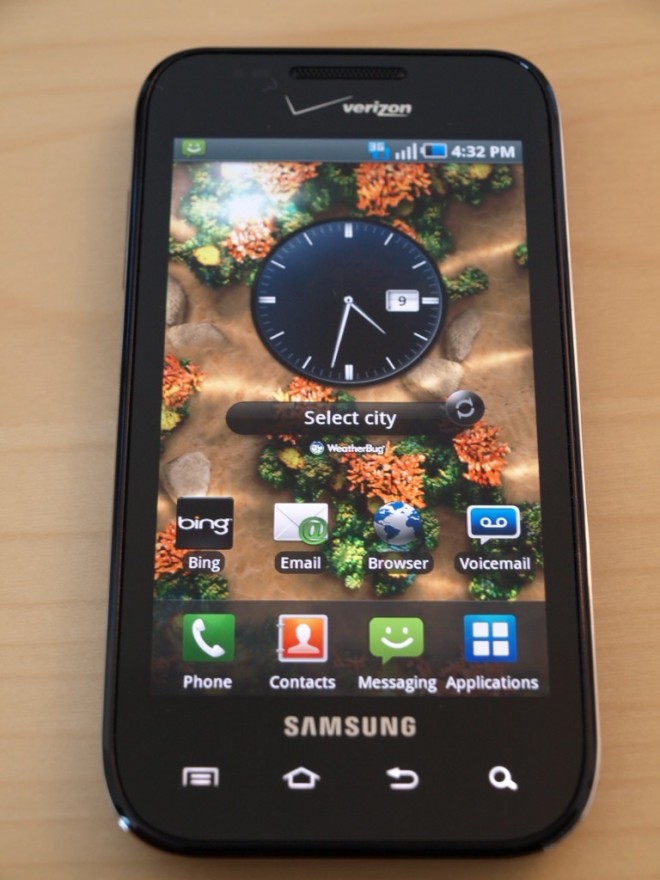 Verizon has just gone live with their own variant of the Samsung Galaxy S Android phone, dubbed the Verizon Fascinate, so of course we had to get our very own Fascinate to play with. The $200 (with new 2-year contract) Verizon Fascinate is the last Galaxy S phone to hit a major US wireless carrier, but it brings with it a couple small tweaks that differentiate the Fascinate from the AT&T Captivate and the T-Mobile Vibrant and the Sprint Epic 4G (which is actually a Galaxy S Pro, but who’s counting?). We haven’t had too much time to play with the Fascinate, but we’ve managed to unbox the phone to get a some first impressions about the last of the Galaxy S entrants into the US market. Here goes. 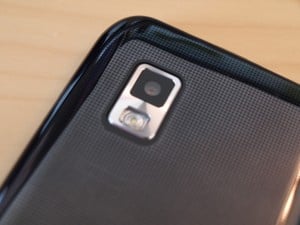 First off, you’ll notice that the Verizon version of the Galaxy S looks a lot like the T-Mobile version. Both the Verizon Fascinate and the T-Mobile Vibrant sport light redesigns that stay true to the original Galaxy S design aesthetic. The front face is a smooth slab of glass that’s unmarred by physical buttons or unsightly logos. The Android navigation buttons are backlit, capacitive (touch sensitive) buttons that blink when you tap them. And, when you turn the phone on, a big and bright 4-inch Super AMOLED display lights up from underneath that all-glass face of the device. The backside of the device is glossy plastic, adorned with a sort of polka-dot paint job that gives it an almost “3D look” that tricks the eye into thinking the battery cover has some texture to it – it does not.

Inside the phone, you’ll find the 1Ghz Hummingbird processor (with the class-leading Hummingbird GPU), 5-megapixel camera (with LED flash), 3G data, WiFi (B/G/N), GPS, Bluetooth, microSD card slot, 3.5mm headphone jack, and 2GB of onboard storage. It runs the Android 2.1 OS, but is skinned with Samsung’s much-improved TouchWiz 3.0 UI, lending the Fascinate an iPhone-esque feel. That’s either a good or bad thing, depending on how you feel about Apple and the iPhone. Anyway, moving on.

The UI is easy to use and is pretty much standard Android. You get multiple homescreen panes, on which you can plaster Android widgets, app shortcuts, and even Samsung’s own widgets – like Daily Briefing and Buddies and Feeds & Updates. The Samsung widgets are part of the TouchWiz 3.0 UI, and we like them. You can also find some Samsung customizations in the notifications tray that you drag down from the top of the screen. Pulling that down serves up all the Android system notifications that you’re used to, but it also serves up quick-access buttons that let you quickly toggle WiFi, GPS, Bluetooth to help you save power when you’re not using those radios.

Another cool feature of the Fascinate is the Smart Alarm. Samsung realizes that we all hate waking up to harsh alarms “buzzing” our ears off in the morning, and so created the Smart Alarm feature as part of the TouchWiz 3.0 suite of customized Android apps and widgets. You set Smart Alarm to gently wake you up by playing soothing sounds of nature for 10, 15, or even 30 minutes. The alarm starts of softly and gradually increases its volume. The idea is to get you to gently rouse from sleep using alarm tones that don’t wreak havoc on your nerves. If you sleep through the entire Smart Alarm, the regular alarm will kick in and promptly get you going.

As for the phone itself, it feels a lot like an iPhone. It’s slim, has a fantastic display, and doesn’t “over-style” itself with unneeded design elements. We like that the Fascinate has a hot-swappable microSD card slot, so that you don’t have to pop the battery out and reboot the phone to get at the microSD card – a big bonus for those of you that regularly swap SD cards depending on your music listening or video watching needs.

Check out the hands-on photo gallery and the two hardware and software video tours below!

Say you're not a mobile phone geek like us, and you don't have your Android smartphone at arm's length from...