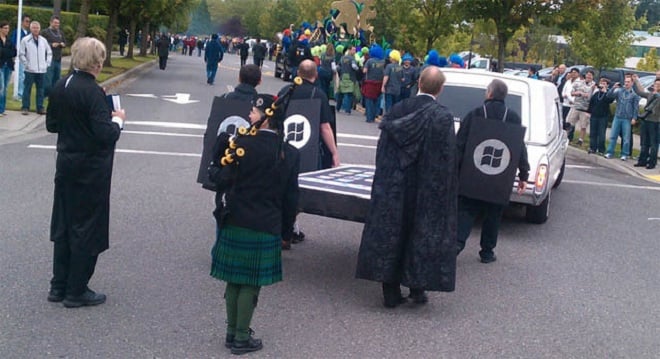 Microsoft just wrapped up a huge parade for the upcoming launch of its Windows Phone 7 platform and it reportedly included a funeral procession for the Apple iPhone and BlackBerry handsets.

The celebration took place at Microsoft’s Redmond campus and the Microsoft mobile team were the participants. The workers reportedly dressed in funeral-like costumes and marched throughout to celebrate the death of the BlackBerry and Apple iPhone.

We know that Microsoft Windows Phone 7 will be launching October 11 but is it enough to bury the competition? I’m cautiously optimistic about the potential of this upcoming platform because it does look like a fresh take on the smartphone market.

The user interface is the first thing that jumps out as it’s not just a bunch of icons in a grid. Instead, this uses a series of tiles or hubs which constantly stream in live data. This sounds wonderful but we’ll have to see how well this works in real life before we can make a real decision.

Microsoft Windows Phone 7 will also leverage the software giant’s services, as you can expect these devices to rock Zune, Exchange, Xbox Live, and Office software out of the gates. The Windows Marketplace for Mobile will also provide the ability to add third-party apps which can be standalone apps, or integrate with the tiles.

It’s going to be tough though because the Apple iPhone is well established, as are Android and BlackBerry. Additionally, the upcoming Windows Phone 7 will be lacking features that some users are expecting like strong Twitter integration and copy and paste. The platform cannot be as mature on its 1.0 version once it hits the streets but if it can be good enough, it should gain some traction as the platform matures.

What do you think of Microsoft’s chances in the smartphone spaces?

Update: Yes, the Microsoft team did the thriller dance.

Well, what do we have here? We've seen the Asus Windows Phone 7 phone before but now it's being shown...