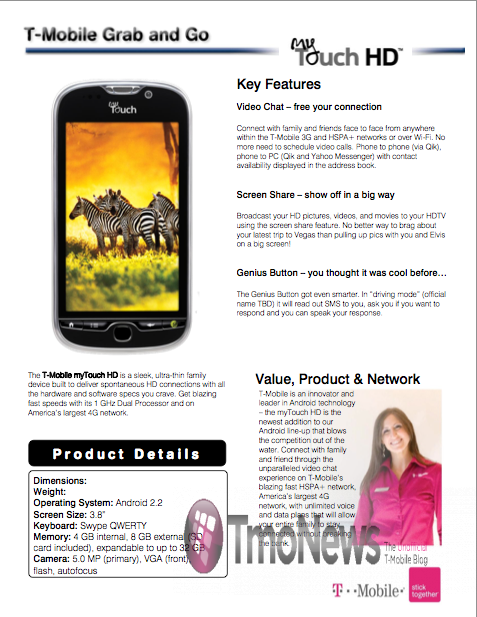 The T-Mobile myTouch HD handset debuted in early renderings but a leaked promotional sheet from T-Mobile finally fleshes out some of the handset’s details. As expected, the myTouch HD will be a high-end offering with HSPA+ connectivity, 3.8-inch display, 5-megapixel rear-facing camera with autofocus, VGA front-facing camera with support for Qik and Yahoo Messenger over a cellular connection, Swype, 4GB internal storage, 8GB microSD card (up to 32GB supported), and Android 2.2. The document details media sharing through an HDTV but does not clarify whether that is achieved via a wired HDMI connection or a wireless DLNA connection. As hinted in earlier renderings, the myTouch HD also loses the Android search button and replaces it with an advanced-feature Genius button.

One interesting aspect of this document is T-Mobile’s proclamation that they are America’s largest 4G network. Apparently, T-Mobile’s marketing department did not want to wait for the International Telecommunication Union to define 4G for us and took it upon themselves to crown HSPA+ as a 4G technology. T-Mobile has rolled out HSPA+ at a steady clip and, accordingly, they are now the self-proclaimed leader and boast of  having the nation’s largest 4G network. Nice try marketing department; but thanks to a reality check from my fellow editor, Stefan, we know better than to fall for your marketing lies.

The release date and pricing still a mystery but it is worthy to note that the myTouch HD is the second phone in T-Mobile’s rumored Project Emerald. The other handset in this rumored promotional push is the G1 Blaze which is now known to the world as the T-Mobile G2 last week. With one handset officially unveiled, I would expect the other handset to get the official nod sometime soon.

[via Phandroid and TmoNews]

Zoodles for Android turns the phone into “Kid Mode”

After conquering the desktop market, Zoodles is going for Android smartphone users and their kids. The company that "puts devices...