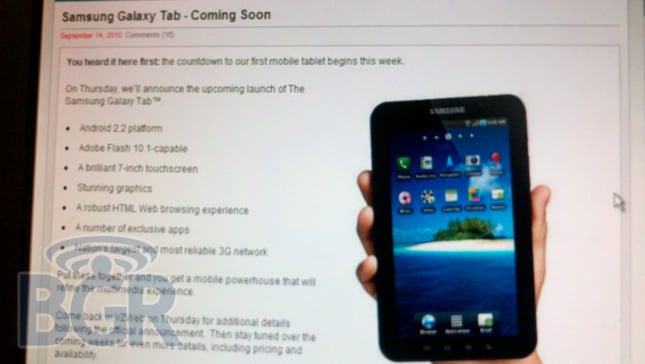 It may not be actual branded hardware, but we’ve got confirmation the Samsung Galaxy Tab coming to Verizon. The Tab will be announced on the 16th, but pricing and availability will likely be a no-show.

Hot on the heels of the AT&T branded Galaxy Tab, the leaked Verizon document confirms that Big Red will indeed carry the Android tablet and it will be announced later this week. If you haven’t check out our hands-on video of the Tab, make sure to check it out. The document confirms some of the specs we were expecting from the Tab, including the 7-inch display, Android 2.2 Froyo, Flash support, 3 megapixel camera, WiFi, and GPS. The document also mentions that we should stay tuned in the coming weeks for pricing and availability, so we’re thinking we’ll see this device sometime in October the earliest.

The October time frame may be a good time for Verizon. With the rumored Motorola Android tablet expected in November and possibly a Chrome tablet some time shortly afterward, Verizon could let loose its arsenal of tablets in a very short amount of time to combat AT&T.

No word on any tablet availability for T-Mobile, so we’re just hoping for one before we can wish for a decent selection of tablets. Let’s hope that Sprint will also increase its tablet offerings after the Galaxy Tab as well. I wouldn’t be surprised to see the Sprint version of the Tab come out a month later if not longer, as it will likely support the carrier’s 4G service.

So right now it’s a showdown between Verizon and AT&T, again. It will be interesting how each carrier will market their tablets, but it would be awesome if we saw BOGOs (buy one, get one free promotions), or even a discount on a smartphone when you purchase a tablet. We don’t have much longer to wait and this holiday season will be the hottest ever.

Two Texas children, ages 11 and 13, go on holiday with their parents, come back with $9.7k phone bill

You've heard it once before, and I'm going to tell you over and over again until you learn to switch...