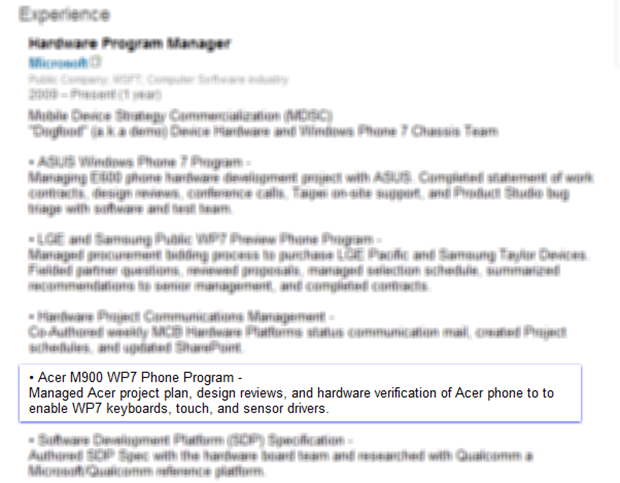 A LinkedIn profile suggests that Acer is working on a Windows Phone 7 handset. The profile belongs to an unnamed Microsoft hardware engineer who boasts of having worked with Acer to “enable WP7 keyboards, touch, and sensor drivers”. Though most of the profile is deliberately blurred to protect the identity of this engineer, it is readily apparent that he or she also worked with Asus, LG and Samsung on their Windows Phone 7 handsets.

Though not a confirmed launch partner, Acer is possibly prepping for a launch after the first wave of Windows Phone handsets have hit the retail shelves. It is no stranger to smartphones and has previous experience with Microsoft’s mobile platforms. The Taiwanese manufacturer entered the smartphone market in 2009 with not one, but four Windows Mobile 6.1 handsets that were part of its Tempo line. While Windows Mobile heads to the software boneyard and WP7 prepares for its big launch date, Acer has been focusing on the Android platform. It has several Android handsets under its belt, including the popular Liquid E smartphone.

Knowing the quality of Acer’s offerings on both the Windows Mobile and Android platform, is anyone interested in a Windows Phone 7 handset from the Taiwanese manufacturer?

Seesmic released a short but sweet video that previews its upcoming client for Windows Phone 7. Similar to the iPhone...