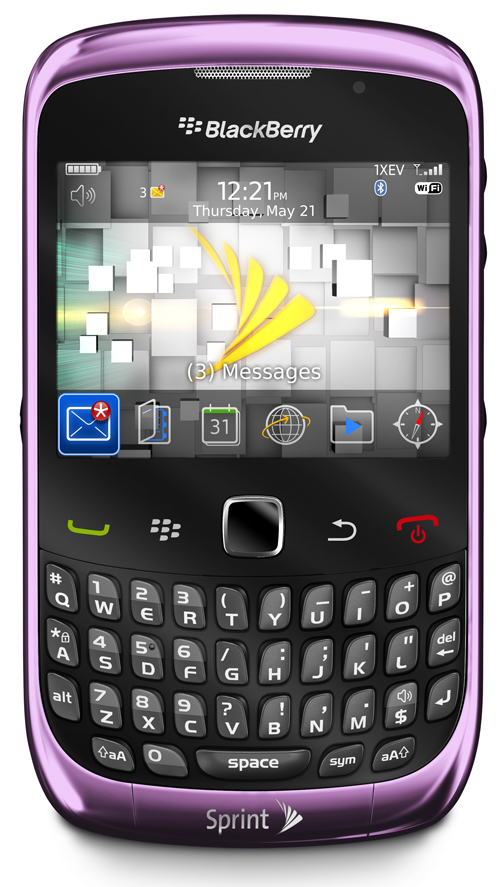 Not to be out-done by Verizon, Sprint has announced that they will be offering the BlackBerry Curve 3G 9330 in gray and purple  starting September 26 for $49.99 on a two-year contract after mail-in rebate. Most sales channels should have it from October 10 onwards. Sprint confirms BlackBerry 6 upgradeability on the Curve 3G, but not until 2011.

The 9330 differs only slightly from the GSM 9300 that was announced on T-Mobile a few weeks ago. It ditches Wi-Fi n support, but has 512 MB of application memory in its place, which is actually a great trade-off. 802.11 n never did anything spectacular for me. Everything else is pretty much the same, like the 320 x 240 display, 2 megapixel fixed-focus camera without flash, Wi-Fi, GPS, and 3G. It’s a nice, stable, entry-level smartphone that stays affordable by skipping the fancy stuff. The hardware feels great, with rubberized siding, convenience keys that melt seamlessly into the phone, and a solid construction. Considering the added memory and compatibility with RIM’s new operating system with universal search and UI overhaul, the Curve 3G will warrant a look from those who had passed on the 8530 predecessor.

Head over to Sprint’s online store for updates on the device, or take a looksee at our review of the BlackBerry Curve 3G 9300 to get a sense of what the 9330 is all about.

Study: Android Will be Number 2 Platform Before 2011, Challenge Symbian by 2014

A recent study from Gartner is forecasting mobile platform market share up to 2014, and echoes the results of earlier...