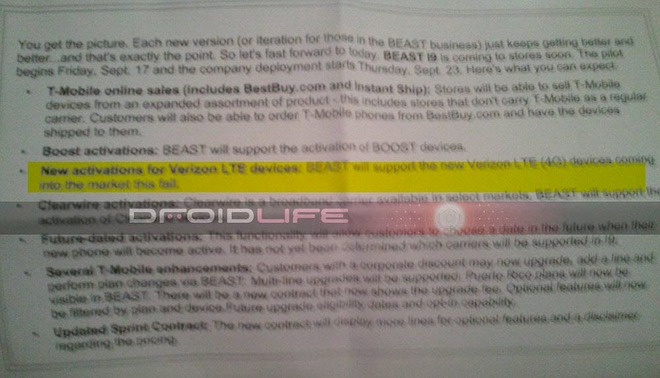 We know Verizon is starting an early and aggressive push for LTE, and there is a rumor floating about that Best Buy will be carrying LTE-capable devices as early this fall. After all, the carrier says it’s going to be launching LTE in 30 “NFL cities” very soon. What good is a lightning fast network with no devices to take advantage of it, right?

While there are no specific devices mentioned on the BEAST, Best Buy’s internal activation system, it does say that Verizon LTE devices will be arriving this fall. However, I’m 100% certain this could only refer to data cards and USB sticks and not smartphones. I’m also 100% certain that this information probably couldn’t have done any worse than being on a piece of paper looking like it could have been printed with a 10-year-old LaserJet in someone’s cubicle and then getting photographed with a cell phone camera by someone who’s had too much caffeine and offering it as evidence. But that’s just me.