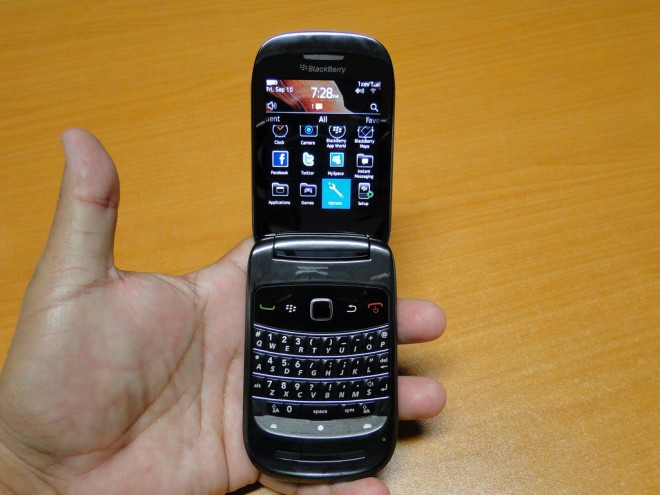 The BlackBerry Style 9670 code-named Oxford has been the subject of a few short video clips, but recently some enterprising Mexicans got their hands on the unreleased clamshell long enough for two full video tours and some of the cleanest pictures we’ve seen of the phone to date. Most of the previous hardware specs we had been hearing up until now are confirmed: 5 megapixel camera with flash, HVGA display, Wi-Fi, 3G via EV-DO 1X, full QWRTY keyboard and an external display.

The first video gives a nice hardware comparison with many other BlackBerrys, including the Pearl, Storm2, the Curve 8520 and its sole clamshell sibling, the Pearl Flip. Obviously the BlackBerry Style is a bit chubbier than all of them by sheer virtue of the form factor, but when closed it’s shorter than the lot. One interesting hardware change is that the BlackBerry Style is going back to loading in microSD memory cards from the side rather than under the battery door, which might be handier for folks who are prone to switch up theirs cards once in awhile.

Despite the BETA watermarked all over the background, Spanish localization seems to cover most of the OS. All of the usual OS 6 goodies that we saw in the BlackBerry Torch 9800 are there: social feeds, WebKit browser, universal search, and categorized icon view. The video runs through the revamped media player, and shows how the HVGA display handles video. One part shows how the media player works with the Style’s unique external display; just use the camera key to pause/play, and the volume controls to skip tracks. Works for me.

Be sure to take a look at these videos before they get pulled from YouTube, and for when they do, there are some stills just a bit further down.