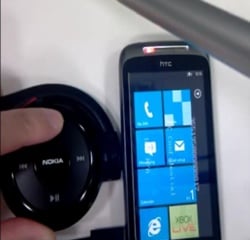 The barrage of Windows Phone 7 handsets hitting in the upcoming months are slowly being fleshed out. Earlier today, we read about the HTC HD7‘s launch date and pricing and now we have a closer look at the rumored HTC Mozart which has been spotted in the wild.

Being a European handset, the Mozart should be officially unveiled in the upcoming weeks with a full launch slated for October. No word on whether this handset will land in the US but the HTC Schubert is expected to land on T-Mobile in November and it looks nearly identical to the Mozart. It is possible that we are looking at two variants of the same handset with the Mozart headed to Europe and the Schubert to the US. Sounds reasonable, no?

Everyone's favorite one-click root program for HTC Android phones, UnrEVOked, has been updated after being MIA for a while. The...