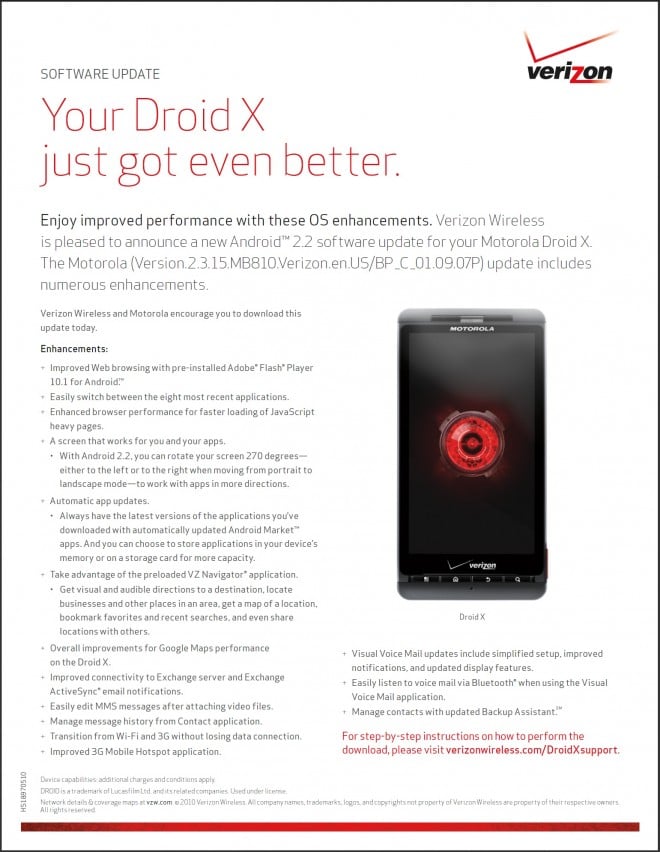 If we’ve heard it once, we’ve heard it a hundred times, but this time around, there’s documentation to back up the availability of Android 2.2 Froyo on the Motorola Droid X.

The Verizon Wireless Droid X support page was updated and it looks like the update is ready to launch. While there’s no specific date as to when the OTA will actually begin rolling out, we have every reason to believe it could be very soon – possibly as soon as tomorrow.

If you were a little trigger happy on the leaked Froyo build, you may want to revert back to Android 2.1 before you can even receive the official update. Motorola wasn’t too happy about people updating to Froyo with an unofficial build, and we don’t think they will try to make it as easy as HTC did for users who jumped the gun when Froyo leaked for the EVO 4G.

Whenever the OTA is officially pushed out, users should be quite happy, as they’ve been waiting for quite a while. It looks like Motorola really meant “late summer,” eh?

Android 2.2 on the Droid X will be quite a nice update. We already know what Froyo brings to the table, but experiencing it is much better than just being in the know, and even those users who are fully aware of Froyo coming to the Droid X will still likely be blown away from all the speed enhancements and extra features when they actually get to see them firsthand on their own device.

OTA updates are convenient, but they take time to get to all users. So, even if Verizon does flip the switch on the Froyo update for the Droid X, it may take a while to hit your handset. But worry not, dear Droid X user, this is Android.

By the end of the day the update begins rolling out, one of the great Android devs out their will probably have repackaged the file into a package for manual installation.

You may not have much longer to wait, Droid X users. Can you contain your excitement?

Credit Suisse weighs in with its analysis of the Verizon iPhone rumors and paints a very rosy picture for Verizon...