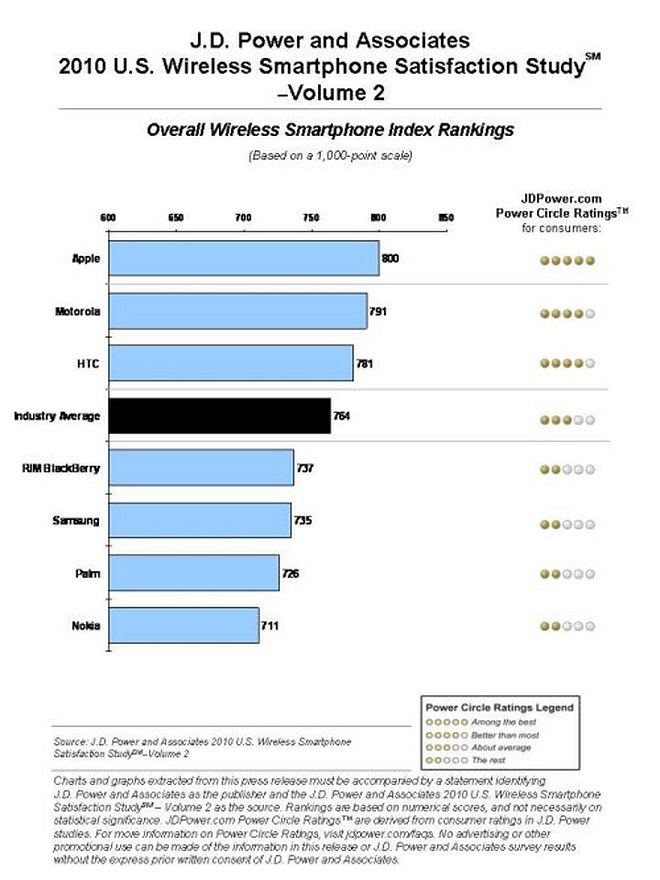 Android has certainly helped HTC and Motorola in cell phone satisfaction ratings according to JD Power. While Apple still remains king, it’s very clear that others are beginning to catch up. And with devices like the EVO 4G and the Droid 2 and Droid X, it’s no surprise that HTC and Motorola are giving the iPhone a run for its money.

Apple still earned top marks from owners with an exact 800 score, but Motorola’s Droid line has all but wiped out the earlier chasm, scoring 791. Its fellow Android competitor HTC has also pushed past the industry average for the first time to reach 781.

Good to see folks happier with their HTC devices as the company continues pushing out some pretty amazing Android handsets. Same for Motorola, whose comeback device was last year’s Droid, after a long string of complete failures in the mobile space.

Of course, this also means trouble for Apple, who has maintained a pretty good lead on customer satisfaction and even in OS market share up until this point. Not only is it beginning to lose ground to Android, but apparently it’s also seeing some stiff competition from the likes of Motorola and HTC.

The ratings may prove troublesome for Apple. It has regularly used JD Power’s charts to tout the iPhone’s quality but now can’t claim an unambiguous lead like it could in the past, when it had more than 50 points over its best alternative. The iPhone 4’s influence over the rankings isn’t known, but HTC and Motorola together have released some of their most popular US phones ever in the past half-year, including the Droid Incredible, Evo 4G, Droid 2 and Droid X.

It appears that the iPhone 4 is yet to jump into the mix, and it would be interesting to see just what the numbers are for the device whose antenna seems to cause fickle reception.

Looking at the chart, RIM, Samsung and Nokia are below the industry average, with the world’s largest mobile manufacturer, Nokia, dead last. Will its N8 and application development efforts help turn that around?

Ivan Seidenberg, Chief Executive Officer of Verizon, put a damper on the latest CDMA iPhone rumors by stating that "at...