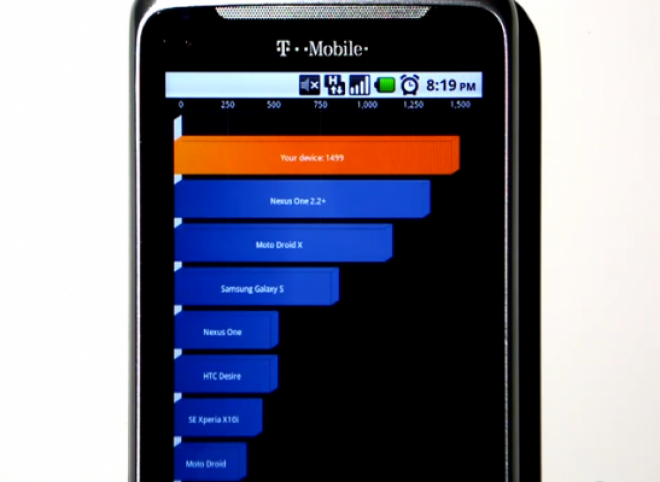 For those of you who haven’t pre-ordered the new T-Mobile G2 because you think it will be too slow to satisfy your speed needs, here’s a video to put those complaints aside. The G2 has been benchmarked, on video this time, using the Quadrant application. If speed was the main concern holding up your purchase, you’ll be relieved at the results.

It’s hard to argue with the score the G2 nailed, a solid 1499, besting the Nexus One by a nice little chunk. Best of all, the CPU used in the G2 can be overclocked to 1GHz already. Once the device is rooted, we’ll see it overclocked to 1GHz and have to re benchmark the thing. While Quadrant may not be the most reliable benchmarking application, it’s no doubt one of the most popular. But, that’s not to say it’s not good, and it’s made even better by the fact that it’s available for free in the Android Market.

Of course, overclocking a device can result in stability issues, as well as a significantly shorter battery life (ahh, the life of an Android modder). Nonetheless, the G2 will be able to perform with the big dogs without even being overclocked, and will likely receive software updates much sooner than any other device, the Nexus One and its likewise stock Android UI excepted. We’re still waiting for even the smallest taste of Gingerbread, and we’re hoping its release will be sometime next month. Hopefully.

So, any of you non-believers impressed yet? The G2 performs just as well as you’d expect from a high-end smartphone today, and it will surely satisfy the power-user’s needs with no problem. If you pre-order now, you could be one of the lucky ones that will get their brand spanking new T-Mobile G2 on Monday, as some (like myself) are reporting.

Is the G2 up to snuff for you? If not, what do you think it needs to win your heart and cold hard cash?

Now that we're hearing RIM may be announcing a tablet at the BlackBerry Developer Conference next week, folks are probably...