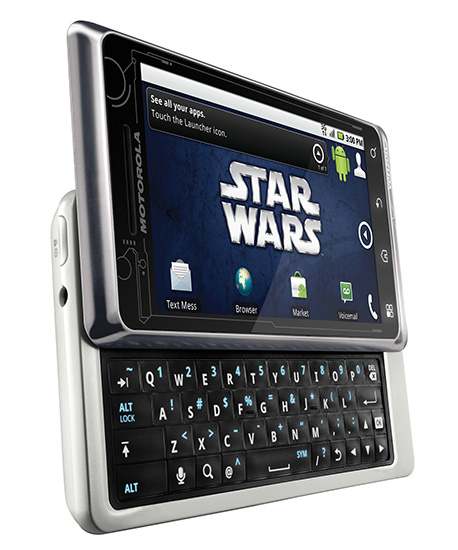 Verizon confirmed the launch details for the R2-D2 edition of the Motorola DROID 2. The Star Wars branded handset will be available starting September 30th for $249 after a $100 mail-in rebate and a two-year customer agreement. The Star Wars branding, though irresistibly geeky, will cost you an extra $50 over the $199 price tag of the DROID 2.

While the paint job and custom Star Wars content set this handset apart from its Android brethren, the R2-D2 version is identical to the DROID 2 under the hood and does not rock a 1.2GHz processor as rumored. The specs for this handset include:

Verizon is also launching an Empire Strikes Back application for Android 2.1 devices which includes widgets, sound clips, a photo gallery, and live wallpapers from the Star Wars movie. If that is not enough for you, additional exclusive Star Wars content will be available for Verizon Wireless customers who pony up $2.99 for the privilege of downloading these multimedia extras.

The DROID R2-D2 will be available online and in select Verizon Wireless stores this Thursday. If you are a potential buyer, you should call your local store to confirm that it will be carrying this Star Wars handset. Several stores are also throwing launch parties with Star Wars characters and free giveaways to celebrate this the arrival of this ultra-geeky handset.

When making your purchasing plans, remember that the handset is reportedly a limited edition model and Verizon supposedly has a discrete number that they are selling. Though not confirmed, it is thought that the stock of R2-D2 handset will not be replenished once it is sold out.

Does anyone have plans to snag this Motorola handset when it debuts later this week?