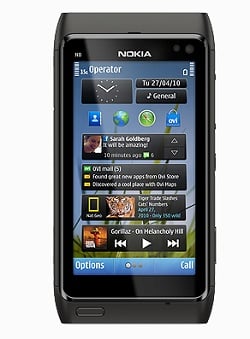 Nokia has finally started to ship its flagship smartphone but is the N8 enough in a world full of the iPhone 4 and killer Android devices?

Don’t get me wrong, the Nokia N8 is no slouch. It has drool-worthy features like a 12-megapixel camera and pentaband radio chips. That’s really cool for U.S. users because it means the smartphone can use the 3G networks of AT&T and T-Mobile – a rarity among phones.

The Nokia N8 is nice to look at too, as it has a large capacitive touchscreen and a nice slab form factor. I’ve played with the device briefly and I believe the world’s largest handset maker has finally wrapped its brain around a smooth, multitouch interface.

“With the N8, and the new Symbian software, we are bringing a familiar, faster and more intuitive user experience to the world’s most popular smartphone platform. The Nokia N8 has received the highest amount of consumer pre-orders in Nokia history and we are thrilled to start shipments of the N8, the first of Nokia’s new Symbian smartphone range,” says Jo Harlow, Senior VP at Nokia, in a prepared statement.

The Nokia N8 faced a few delays but it should be shipping out now. Why am I not optimistic about its chances? It’s the software, stupid.

The device is powered by Symbian^3 and it just isn’t on par with competitors like iOS 4.1 or Android 2.2. I found Symbian^3 to be a little slow and stagnant and the overall polish of the platform is just lacking.

That doesn’t mean that it’s not a highly-capable operating system. Symbian^3 is more than capable of browsing the web, making phone calls, getting free navigation, sending e-mails and even playing Angry Birds.

The N8 will cost at least $549 directly from the handset maker but that won’t require a long-term contract with a mobile operator. Any of you interested?

October 11th and November 8th are two dates to mark on your calendar. According to the Wall Street Journal, that...