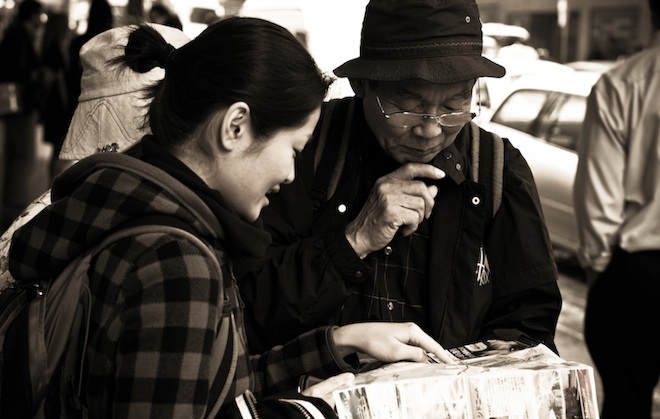 According to the Royal Melbourne Institute of Technology the sentence “Where are you?” is the most commonly sent text message. I’ve got no problems believing that. They thought to themselves then, what’s the easiest way to get people to share their location? There are services like Gowalla or Foursquare that turn your location into a game of collecting badges and mayorships, but what about something even more basic, something so simple that all devices, from the 20 EUR Nokia phones in Africa to the 600 EUR Apple iPhone 4, can use to help us find each other?

Enter GeoSMS. Based on the standard SMS technology, it’s just a string of text added to the end of a text message. Instead of telling your mates that you’re “At the pub”, you can say “At the pub geo:-37.801631,144.980294”. That’s an extra 25 characters, 26 if you include the space, so operators probably love this since it’s going to make people send text messages that are over 160 characters and therefore cost customers more money.

No platform specific application, no App Store approval, it’s just a standard string of text that any device can process if smartphone manufacturers decide to adopt the standard. There’s already an application out for Android called “I Am Here” and the kids who knocked this technology up are encouraging other people to build applications and services utilizing their standard.

Think this will take off? Since switching to the iPhone 4 last week I’m kind of missing latitude, and while I don’t share my location with friends often, it’s mainly due to the fact that I don’t know if their device even has GPS, much less the capability to decode a set of coordinates that I send to it via either a Twitter application, Facebook application, or whatever. Crossing my fingers that within 2 years GeoSMS is standard in all devices, smartphones or otherwise.