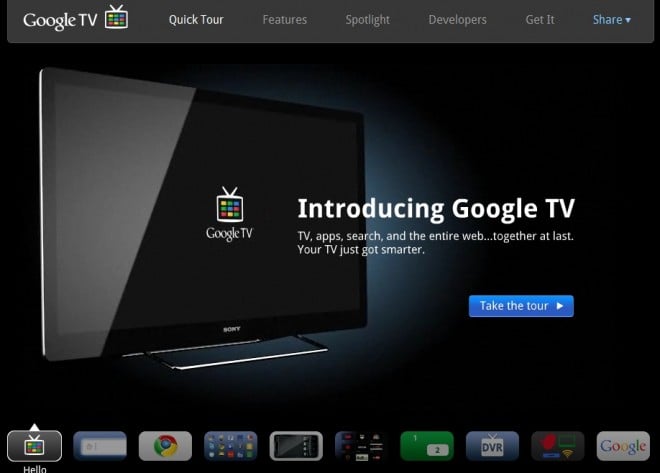 TV addicts who may want a little more Android in their lives don’t have much longer to wait. The Google TV site has gone live before the official launch of the service and it provides a nice overview of what it will bring to your TV.

With the upcoming event at on Wednesday for Logitech’s Revue, the site going live is not accidental and we may soon see more from the likes of Sony, who has an event regarding Google TV on October 12th. The Google TV site gives a decent overview of the features of the service, and what will be available in the future.

Android fans will surely be excited about applications on their TV, but they will be limited to those that are pre-loaded only. Developers will have the option to make apps for Google TV starting next year, but if GTV ends up getting rooted before then, we may see more applications sooner than later.

I’ve been wavering about Google TV. Initially, I was very excited about it and then shortly became somewhat indifferent to it. It wasn’t until recently that I found a time that the service would be helpful.

I was watching the History Channel, when I got to thinking about an old show they used to show. I wanted to be able to find that show, but I would have had to jump onto the computer and see if I could find it through YouTube or another outlet. With Google TV, you wouldn’t have to leave your seat and miss the current show you were watching. The service began to look a little more appealing.

How the public will respond to Google TV is beyond us and is anyone’s guess. With the ability to search what’s on TV or online right from one screen, have Android applications, and use your Android phone or iPhone as a remote, we think it could definitely catch on. Whether the steeper price will be able to challenge Apple TV remains to be seen, but Google does tend to slowly take over almost anything it goes after, for good or for worse.

We’ll still have to wait and see, but while we’re waiting, why don’t you check out the site now?

We know your television is not a mobile device, but the OS is and it’s exciting to see how this can translate. Just don’t expect to cover any Android coffee makers anytime soon.

The tablet wars might have begun, but LG is not going to be taking part in it any time soon....