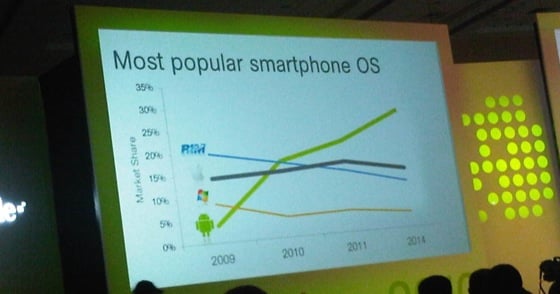 If you believe a spy shot leaked to our friends at PocketBerry, then YES, BlackBerry OS is in a particularly steady (if not steep) decline. The image you’re looking at above was snapped by an anonymous tipster, present at a T-Mobile U.S. east region meeting. The graph pretty much speaks for itself. Oh BlackBerry OS, oh Windows Mobile… you guys are in trouble. But this should come as no surprise, right?

According to Gartner, Google Android devices have outsold the iPhone globally, and RIM’s BlackBerry in the United States in the second quarter. That said, it should be noted that Nokia and RIM are still the kings of the castle, with Symbian OS making up 41.2% of the market, and BlackBerry holds 18.2%. However, if the Android invasion is well and truly on, it should be interesting to see what the situation is at this time next year. Will Android hold the leading market share globally? How about Apple and iOS? Will RIM’s BlackBerry 6 OS help the company hold pace? Or is the chart above simply sign of things to come?

I wish I had a crystal ball, but sadly I don’t. I have a bowling ball in my basement, but that’s just not the same.

What do you think the future holds for RIM and their OS?

Walmart to be the Next iPad Retailer?

Could it be that Walmart will pick up the iPad for sale before the end of the year? If you...