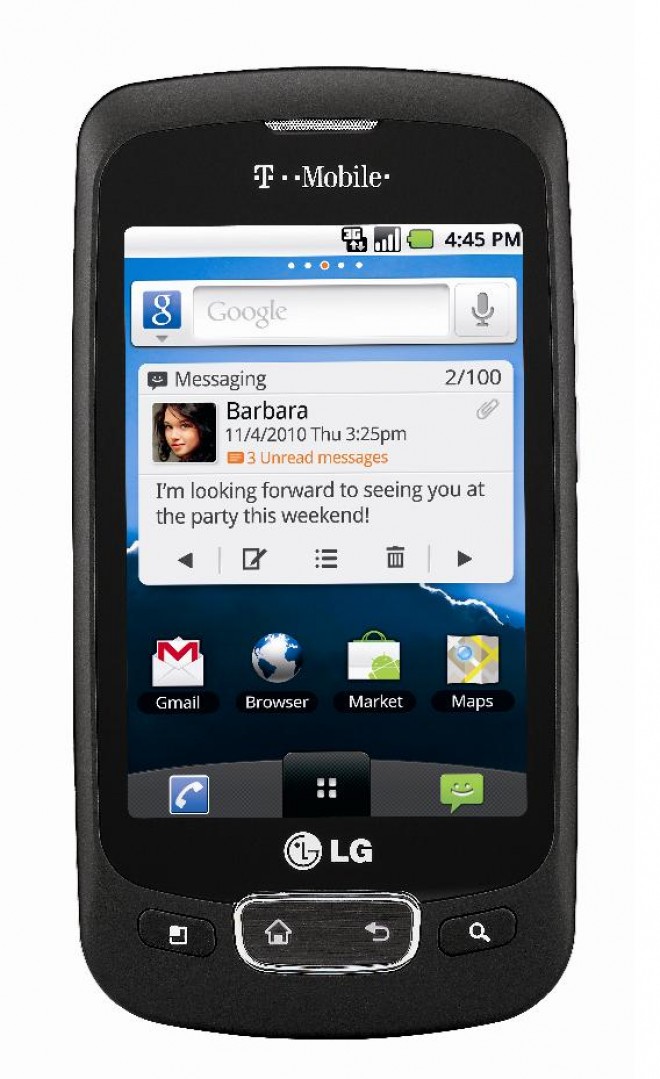 For those of you in need of another T-Mobile Android device in your life, you may want to direct your attention to LG, as they have just announced a new handset in their Optimus line, the Optimus T.

The Optimus T will not be a powerhouse of a smartphone, but will be better suited for those upgrading from a feature phone to a smartphone. Feature phone customers looking to upgrade to smartphones seem to be the new target demographic for smartphone makers around the world, and LG is keen to cash in on this new trend.

The Optimus T features a 3.2 inch capacitive touchscreen, a 3.2 megapixel camera with no flash, and GPS, WiFi (with Mobile Hotspot option), and Bluetooth can also be found on board.

The handset is running on Android 2.2, so expect the experience to be one of the best out there, if not hindered by the hardware, that is. The Optimus T will also ship with the standard Google applications like Maps, Gmail, etc., and will also have Swype pre-installed for those who like to text as fast as they can.

While the Optimus T, along with the LG Ally, come with customized user interfaces, they bear the lightest customizations in the Android space. The LG Ally allows you to change from the LG home to the standard Android home launcher, and I would expect the Optimus T to do the same. The Opimus T looks a little on the cheap side, but the button configuration looks interesting, so we’ll want to play around with the final hardware before we come to any solid conclusions.

The UI comes with 7 home screen panels, providing a lot of real estate to throw applications and widgets on. LG has also customized the application drawer, and allows you to break applications into groups, re-arrange them in virtually any way, and even gives you the option to uninstall apps right from the tray (by tapping and holding the icon and dragging it to the trash can. This is a feature that, on the surface, seems trivial, but is actually really useful in real life.

We expect that this will be one of many Android phones from the manufacturer, as they promised to deliver somewhere near 20 Android handsets this year. Let’s hope they begin to focus on some high-end handsets soon, because the Optimus T certainly won’t sway too many people away from the G2 or upcoming myTouch.