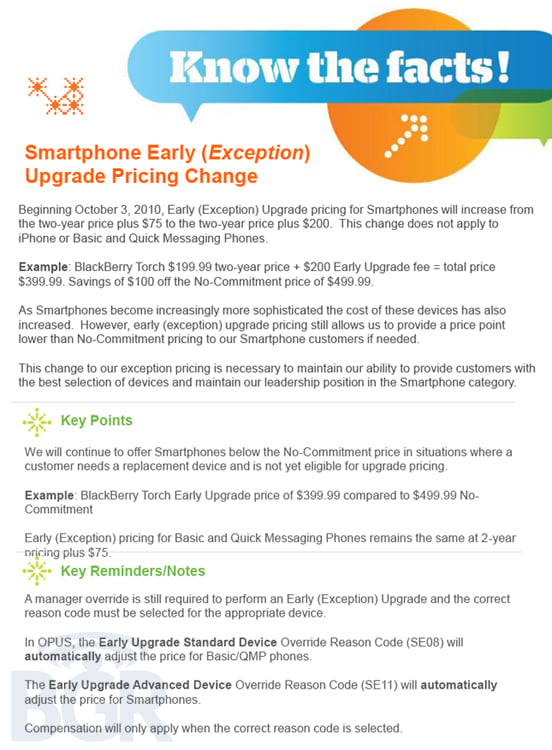 AT&T is doing the unthinkable and raising its smartphone early upgrade cost to $200, or $125 higher than the original fee. This means if you want to upgrade your smartphone before you’re eligible for a full upgrade, $200 will get tacked onto the fully subsidized price (e.g., the BlackBerry Torch, which sells for $199 with a two-year contract will go for $399).

It seems AT&T hasn’t been too pleased with the tons of customers who have been taking advantage of the early exception upgrades and decided to give customers an incentive to hang onto their current handsets. Perhaps what’s most infuriating is that with the original option, you were signing two years of your life away anyway. Now you’re committing to two years and forking over an additional $125 over the original $75 upgrade cost.

AT&T’s reason? The same one it gave for its exorbitant hike for early termination fees: smartphones are growing more sophisticated and the carrier has to pass on the cost to you, the consumer.

So, let’s do a quick summary. If you’re not near the end of your contract and you want to upgrade your smartphone, you’ll have to pay $200 on top of the fully subsidized cost of the phone. This is bringing you dangerously close to the non-commitment price of most smartphones. Oh, and if you decide to cancel after upgrading, you’re going to have to pay a $325 ETF or early termination fee. Excellent.

Or you can just do like many do and hang onto your device for a full two years. You wouldn’t have to worry about either upgrade exception fees or ETFs, either. Then again, if you’re the type who actually holds onto a device for that long, you probably wouldn’t be reading a mobile fanatic site like IntoMobile.

If it’s any consolation to you, however, the iPhone and basic messaging phones aren’t included in this change, but that’s because the iPhone already has its own special upgrade cost.

AT&T CEO Ralph de la Vega doesn't think the tablet phenomenon is a fad, and the leader of AT&T's mobile...