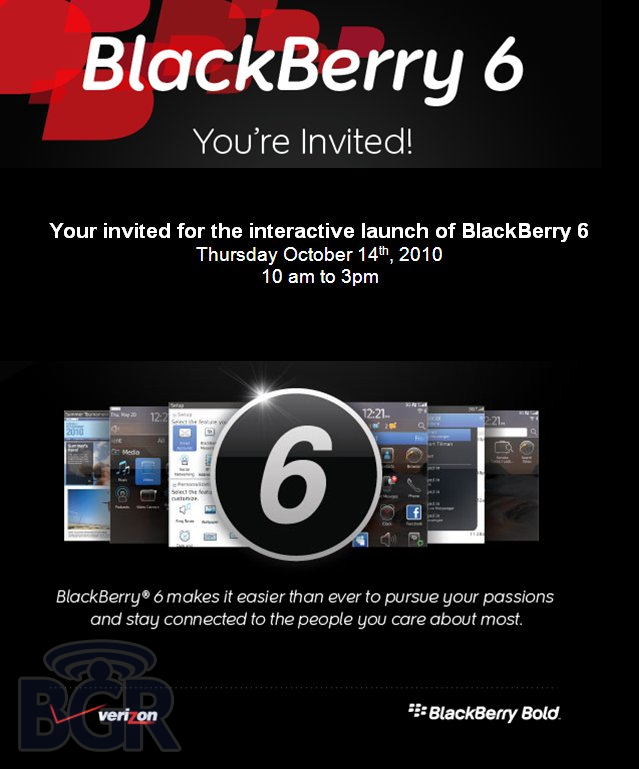 We’ve seen RIM’s new BlackBerry operating system running on the Bold 9650 and Curve 9330, but we’ve had little indication of a release timeframe. Luckily, this invitation to a “interactive launch” event has been shot out to employees, leading us to think that a BlackBerry 6 patch will be shot out on or shortly after October 1. If we wanted to be really optimistic, we could guess that Verizon was announcing the BlackBerry Style 9670, which would make sense given the approaching holiday season.

RIM’s brushed-up OS was launched on AT&T with the Torch 9800 late this summer, with promises of eventual compatibility on the Pearl 9100, Bold 9650, and Bold 9700. That being said, I’m curious when the GSM-based Pearl and Bold will get their upgrades; one would think soon, since RIM is comfortable showing off the software. The biggest feature in OS 6 is universal search, which scours local, application, and web data for search queries, but OS 6 is also a significant facelift, and offers a much smoother, eye-catching user interface. We’ve got a walkthrough of BlackBerry 6 if you want the full tour.