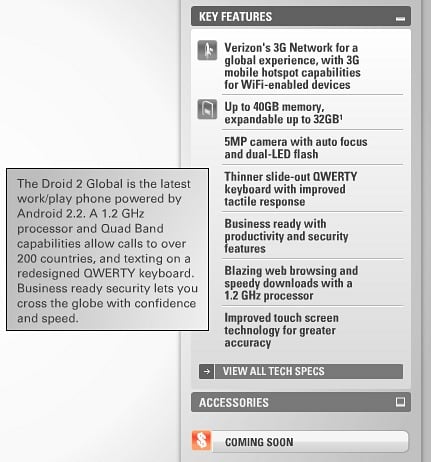 Motorola fans might have noticed the Droid 2 Global quickie on the website yesterday before it was pulled by the folks in charge. The quick appearance gave us a glimpse at the specs for the new Droid handset, however, and it doesn’t look like much of a slouch. In addition to global calling capabilities, this new Verizon handset also packs a little more punch than previous Droid smartphones.

Here is a quick list of specs for you:

The folks over at AndroidGuys also said about enterprise customers:

The site also talks about catering to business and enterprise, which is something we’ve heard a time or two.  We can’t wait to see the official pics and full details.  What are you waiting on Verizon?

Rather than slapping on GSM radios to the current Droid 2, I’m pretty happy to see that Motorola has beefed up its specs, even just a hair, for those globe-trotting, jet-setting Verizon customers.

Still, if I were a Verizon customer waiting for a new Android device, the Droid 2 Global would be it – even for just that little bit of extra processing juice from the 1.2GHz chip.