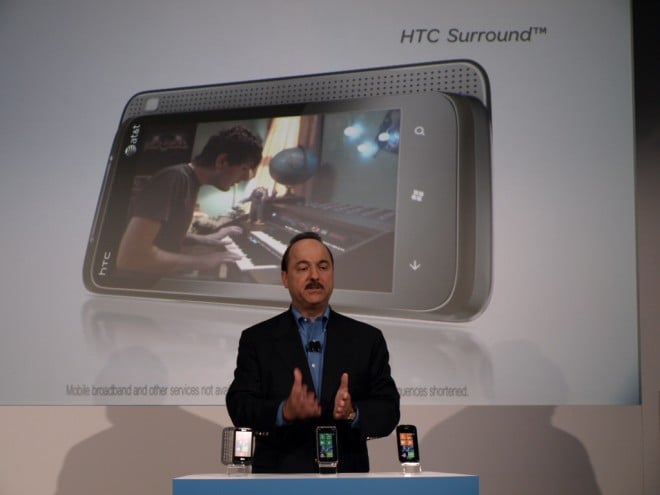 We knew that AT&T would be the “premier” carrier for Microsoft Windows Phone 7 but we didn’t really know what that meant until today. The second-largest U.S. carrier will have three Windows Phone 7 devices at launch and its CEO was at the official presentation to show off some of these devices.

AT&T will be getting the HTC Surround, LG Quantum and the Samsung Focus in time for the holiday season. All three will rock the Windows Phone 7 platform and each is aimed at a slightly different user.

The devices are all relatively similar when it comes to technical specs. Each sports a 1 GHz processor, 5-megapixel camera, WiFi, GPS, Bluetooth, and all the goodies you’d expect from a high-end smartphone.

The HTC Surround is targeted at the multimedia lover, as there’s a slide-out speaker. The LG Quantum has a slide-out QWERTY keyboard for the physical keyboard lovers out there. The Samsung Focus is a touch-only device that has that beautiful 4-inch Super Amoled displays that are found on the Galaxy S lineup of Android phones.

“These devices – quite literally – are game changers, and we are delighted to bring them to our customers,” said Ralph de la Vega, president and CEO of AT&T Mobility and Consumer Markets, in a prepared statement. “It’s a perfect match – phones that re-define gaming and entertainment, riding a network that assures customers a high-speed experience.”

As for the competition, it also got some love from Windows Phone 7. Fellow GSM carrier T-Mobile will be getting the HTC HD7 and the Dell Venue Pro.

Even though Microsoft intentionally focused on GSM carriers, Sprint will also be getting the HTC 7 Pro and Trophy in early 2011.

Verizon is the only major U.S. carrier to not commit to the platform and it has downplayed Windows Phone 7 in favor of Research In Motion, Apple and Android.