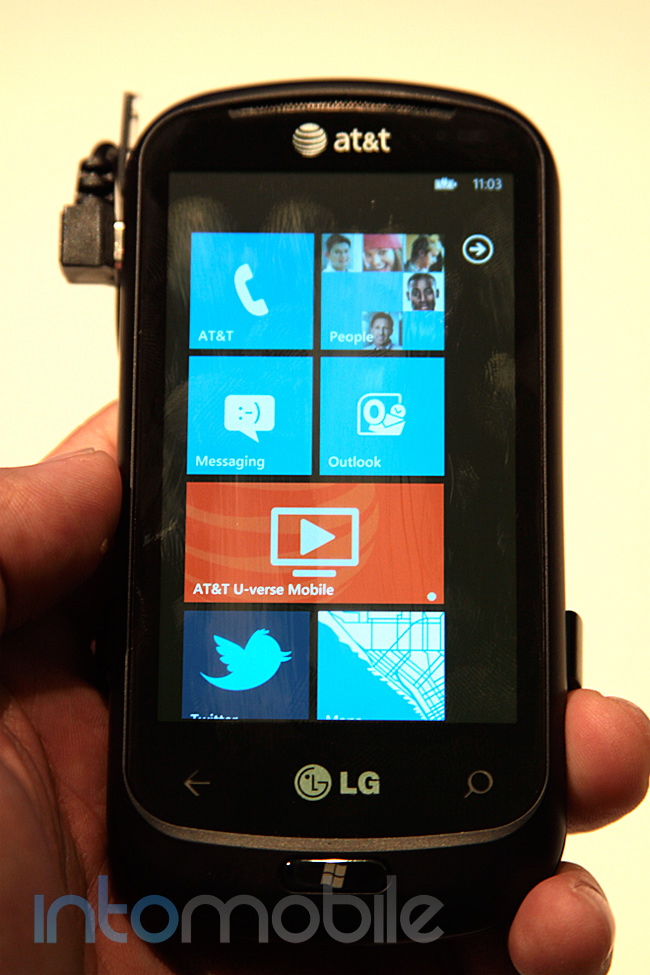 Drowning in this barrage of Windows Phone 7 handsets? Here’s another for you: the LG Quantum – an AT&T-bound slider smartphone with a landscape QWERTY keyboard. The Quantum will feature a 5MP camera, 1GHz processor, 16GB of internal storage and it will also feature DLNA out for you video fans.

The Quantum looks and feels a bit like an entry-level device, but it’s going to be priced at $199.99 with a two-year contract. I feel that’s a bit pricey for the phone, although you are getting a solid set of features. There was just something about the build and materials that made it feel like something you’d get as a first smartphone.

As you can see in some of the images, the phone has somewhat of a rubbery texture around it – like a soft-touch coating that scuffed and scratched quite easily. But at least there won’t be much of a worry with the Quantum slipping out of your hands or pockets so easily. The back plate is a nice, dark, brushed metal that complements the rest of the phone’s motif just nicely.

The Quantum also has a full QWERTY keyboard that opens up in landscape mode. The slider mechanism is good and solid, and most of the phone feels pretty decent, too. Unfortunately, since the device was tethered to the display tables, I really couldn’t get a good feel for the phone by itself or its weight.

With my limited time on the keyboard, the layout felt pretty decent and keys were tactile. Thankfully, the keys were decently spaced, and given their shape and contour, I didn’t have any problems with accuracy, either. It seems like a keyboard I could easily get used to over some time.

There isn’t a whole lot to be said about the LG Quantum, and that’s precisely why I think its price tag might be a bit high. Make it $149.99 and it spices up the Windows Phone 7 deal just a tad more.

Check out our hands-on video coming soon, but for now enjoy the gallery below!