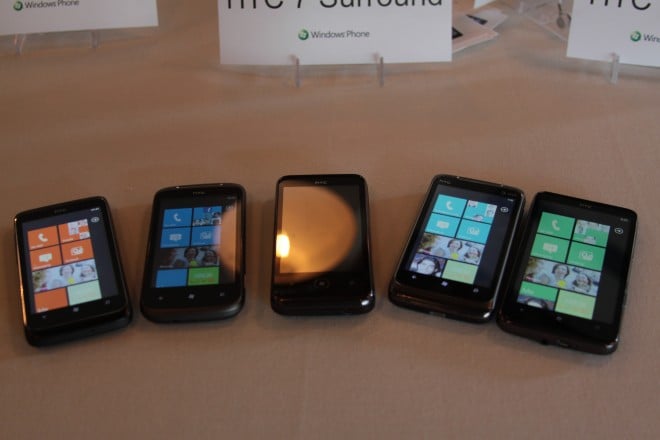 HTC took the world by storm with Android and it looks like it plans to do the exact same thing with Windows Phone 7. With five new handsets announced, there’s a flavor for just about anyone.

Here’s a recap of the newly announced handsets.

HTC Trophy: This sexy handset is bound for Vodafone when it hits and it packs quite the punch. The handset’s specs read very well: 3.8-inch touchscreen display, 1GHz processor, Bluetooth 2.1, WiFi 802.11 b/g/n, motion, proximity and ambient light sensor, Dolby Mobile with SRS surround sound and a 5-megapixel camera with LED flash and 720P video recording. All this come in a tight, sleek package and is taking aim at gamers, but we have a hard time believing it will attract just that clientele.

HTC 7 Pro: This made-for-business device has a lot going for it, but it’s probably my least favorite of the five. The handset looks very chunky, but it may not be all that bad, and we’re going to have to wait until we get the thing in our hands to come up with a real decision. Headed to Sprint, the 7 Pro comes with a 1 Ghz Snapdragon processor, 576 MB of RAM, a 3.6-inch screen, 5 megapixel camera that can record in 720p. Reminiscent of the Touch Pro 2, the 7 Pro offers up a similar design with a full QWERTY keyboard and a screen that tilts upwards for an easier viewing experience while typing out a message. This powerful mini-computer should please the business users or anyone else looking for a huge keyboard on a Windows Phone device.

HTC Mozart: Now this is one powerhouse of a smartphone. The Mozart combines top of the line features on a smartphone, and is packaged in a sexy uni-body piece of anodized aluminum. This monster sports a 3.7 inch display, an 8 megapixel camera with Xenon flash (Thank you!), 512 ROM, 576 RAM, 8 GBs of internal storage, motion, proximity, and ambient light sensors, as well as Dolby Mobile and SRS surround sound. The power behind this handset may just blow your socks off. The Mozart will be exclusively at Orange UK starting later this month and it should hit T-Mobile USA in November.

HTC Surround: The Surround is for the heavy media consumer, as it boasts a unique design that reveals a large Yamaha speaker. The slide out speaker is of course accompanied by Dolby Digital audio support, so those who want to listen to some tunes without having to throw some headphones in will be very pleased to know that the audio output will be exceptional.

Other than the standout feature, the Surround comes with a 3.8 inch display, 1 GHz Snapdragon processor, 8GBs of internal storage, 5 megapixel camera with LED flash, kickstand, 512 ROM, and 576 RAM. Whether you’re a music buff or just want an awesome media experience on the go, the Surround has you covered. Expect to see this bad boy sometime in the near future on AT&T for about $199 with a new, two-year contract.

HTC HD7: This T-Mobile USA exclusive is everything that the HD2 wanted to be. With most of the same specs of its predecessor, the HD7 is here right what the HD2 wronged. Not much has changed, except for the OS, which is enough to give the handset a look as it is, but there are one or two other differences.

The HD7 now records in 720p at 24 frames. Other than that you can expect the same handset as the HD2, which has a 4.3 inch display, 1GHz CPU, 576 RAM, 512 ROM, and Dolby Mobile and SRS surround sound. Sounds good enough to us, and we might have to just grab one once it’s out mid-November.