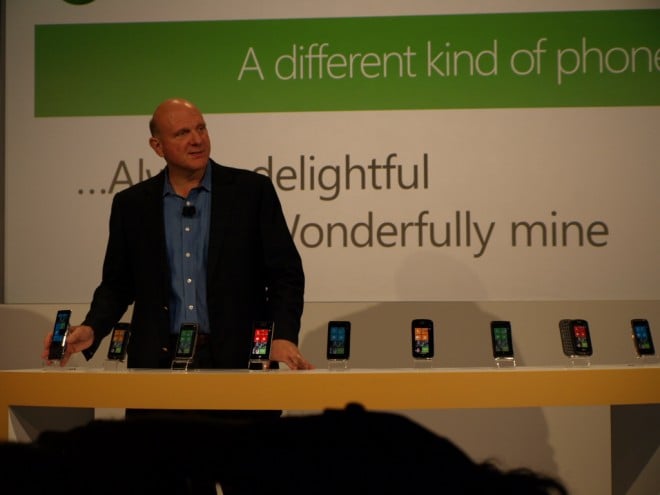 Microsoft is not messing around when it comes to smartphones, as the software giant has just introduced its Windows Phone 7 handset with nine handsets for 30 carriers. Will this new platform be enough for the company to compete in an incredibly crowded space filled with strong competitors like Apple, Google, Research In Motion and Nokia?

On its blog, the software giant said:

The new phone is an important step for Microsoft in three ways. To begin, it is a completely fresh start for Microsoft in smartphones. Second, it represents a new approach from Microsoft toward integrating products and services from across the company into the phone to create a richer experience and greater productivity. Hence the presence of Office, Zune and Xbox LIVE and their integration within the Hub model. And finally, the new phone approach is critical to Microsoft’s efforts to make new gains in the huge smartphone market, which despite the success of the iPhone and Android is still relatively untapped globally.

As we’ve seen with our hands-on time, Windows Phone 7 ditches the icons-in-a-grid user metaphor for a more dynamic hub system. The goal is to give users as much information as possible without having to dive into multiple apps.

For example, the People Hub will have your contact’s communication information include Facebook status. This hub will constantly pull in information from across the web and you’ll be able to use this to respond to texts or status updates without having to use different apps.

The Xbox Live hub should make mobile gamers happy, as you’ll be able to keep track of your avatar and use this to play against other gamers. We know that Electronic Arts will support the platform and look for Microsoft to bring a ton of games, some with 3D graphics, so the Windows Phone 7 platform should be a strong gaming operating system.

Windows Phone 7 will have strong ties with the company’s services including Office, Exchange and Bing. So far, these have all proven to be smooth and seamless experiences but there are still a few things missing.

For example, I use the Bing Maps with the Samsung Fascinate and it works well for the most part. One thing I’m really missing is the public transportation directions on the go that can be found on Google Maps for mobile.

Additionally, it is still a 1.0 version of the platform so things like tethering and cut and paste won’t be there at launch. By comparison, Google will be on 3.0 (or close to it), Apple iOS will at 4.2 and BlackBerry will be at least on its 6.0 version by the time Microsoft’s platform launches. Higher numbers don’t necessarily mean one platform is better than the other but it does show a maturity with the platform and its ecosystem.

Still, it’s a strong platform and the software giant will be promoting the heck out of Windows Phone 7 this holiday season. Look for a ton of commercials over the next few weeks.

In the United States, there will be five smartphones with Windows Phone 7 in time for the holiday season and each of these will have at least a 1 GHz processor, 5-megapixel camera and all the connectivity you’d expect from devices of this class. Each of the phones look pretty stylish, too.

There are still a few problems which could hurt the chances of Windows Phone 7. First of all, only AT&T and T-Mobile will have these devices before the end of the year as Microsoft is delaying CDMA devices until the middle of next year. That means many of the millions of Verizon and Sprint users looking for a smartphone this holiday (and the accompanying two-year contract) will have to look at Android or BlackBerry instead.

The competition will only become fiercer in the beginning of 2011, as Hewlett-Packard plans to double down on webOS with a slew of smartphones, tablets and other connected devices. The Apple iPhone 4 will likely have another good holiday season and Google’s Android should also improve with Gingerbread and/or Honeycomb.

Windows Phone 7 is credible competitor in the smartphone space but it is too soon to tell if this latest platform will get it back to the top or if it is doomed to fail.

Let us know what you think in the comments and tell us which phone you’re most looking forward to.

And we thought all those different Samsung Galaxy S names were hard to follow in the U.S.? South Koreans have...