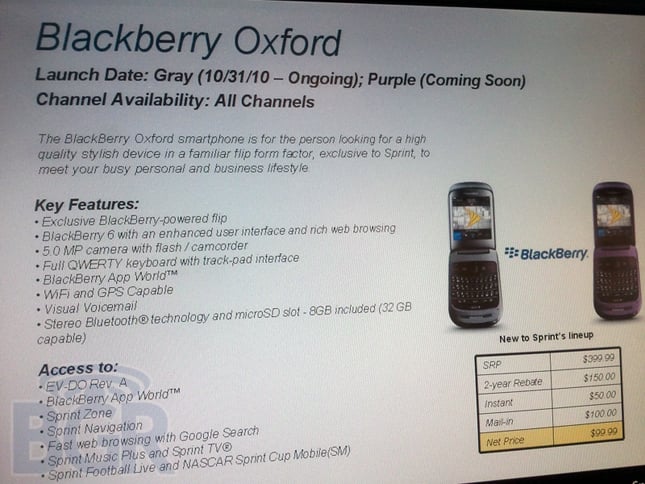 We already had an inkling that RIM’s next OS 6 device, the BlackBerry Style 9670 clamshell, code-named Oxford, would be finding its way to Sprint, and today there’s some added confirmation of specs and an October 31 release date thanks to this leaked slide. The price point is also locked-in for $99 on a two-year contract after rebates. It’s also worth noting that Sprint has an exclusive on the BlackBerry 9670, so don’t count on a Verizon launch at any point soon. Although it’s launching in gray, a purple version will follow.

We’ve seen plenty of this device, with signs pointing towards releases on Bell and Telus as well. Like the slide says, it has a 5 megapixel camera with flash and autofocus, Wi-Fi, GPS, 3G via EV-DO, and runs the new BlackBerry 6, which hosts a bunch of visual upgrades, a new WebKit-based browser, and universal search for local and web content. Elsewhere, we’ve seen its external display, evidence of 4 GB of internal storage, 512 MB of app memory, and an HVGA screen.

A lot of people don’t dig the look of the BlackBerry 9670 and think it looks bulky, but I find pictures rarely provide a good sense of feel and size. RIM’s last flip phone, the BlackBerry 8220/30 failed to impress most folks, but the higher-end specifications on the Style/Oxford will go a long way to effacing the bad taste left by the Pearl Flip.

HTC plans to bring its business-friendly 7 Pro to the UK and rest of Europe in "early next year." The...