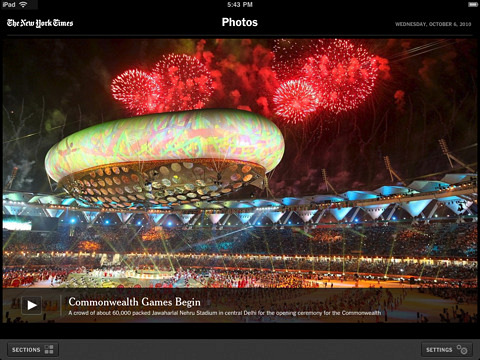 New York Times lovers who happen to own the Apple iPad are going to get excited about this one. The news publication finally has a full content iPad app. Prior to this, your only real options were the iPhone app, which didn’t look all that hot on the big screen, or the NYT Editor’s Choice app. While the latter was designed for the iPad, the content was limited to, well, the editor’s choice.

NYT Editor’s Choice has been pulled from the app store and replaced with NYTimes for iPad. The new app gives you access to all the content you’d normally see online, such as articles, photos and videos as well as select blogs.

As reported by TechCrunch:

“Our iPad App is designed to take full advantage of the evolving capabilities offered by the Internet,” said Arthur Sulzberger Jr., publisher of The Times. “We see our role on the iPad as being similar to our traditional print role — to act as a thoughtful, unbiased filter and to provide our customers with information they need and can trust.”

Of course, with everyone saying that print is dying and the future of news is going to be served up in a digital medium, this is good news for the Times. After all, you can get multimedia content which is painfully absent from the print version. And if you’re the type who likes news with your breakfast, it’s not always convenient to be lugging your laptop around just to view the full version of the site.

If you find yourself thinking twice about this iPad app, you’d better grab it now while it’s free. According to NYT, it will only remain that way until early 2011, at which point it will probably start charging a few dollars for the app.

You Angry Birds fans are crazy! GetJar now has the popular game by Rovio for Android, but most folks have...