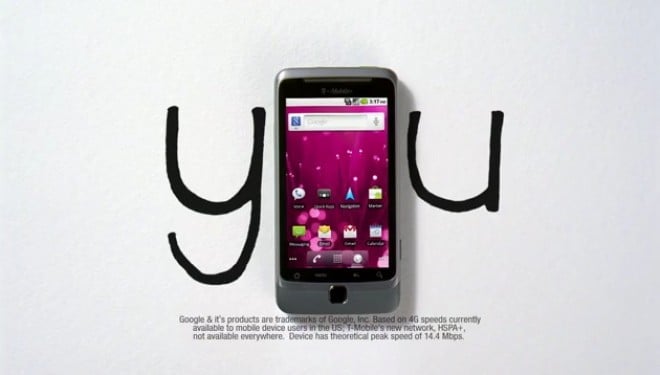 HTC is set to have quite a massive lineup of Android and Windows Phone 7 devices. With five WP7 phones, and a handful of Android phones hitting shelves in the new future, expect a heavy uptick in the “YOU” ad campaign for these device – that campaign is picking back up with the T-Mobile G2 and we have both for your viewing pleasure.

HTC released two short ads for the T-Mobile G2: one aiming for the power users and one for moms. So if you’re a power user and a mom, this may definitely be the device for you.

HTC also touts the “4G speeds” for the G2, highlighting T-Mobile’s lightning fast HSPA+ network that’s been rapidly rolled out across the country. We’re definitely not surprised, as the G2 is the carrier’s first HSPA+ compatible phone, so why wouldn’t HTC or T-Mobile advertise the hell out of it?

Since the ads are only about 16 seconds long, you only get a glimpse of the phone but it’s certainly nice enough to give a second look. The G2 boasts a 3.7 inch display, a new Qualcomm  CPU, a great physical keyboard with the questionable “Z hinge,”  stock Android 2.2 Froyo and a design that can appeal to most anyone.

The G2 is a powerful piece of machine but those wanting beefier features may look to the upcoming myTouch to fill those needs. The myTouch will appeal to those who don’t want a keyboard and would like features like a front-facing camera for video chatting.

Whether it’s Windows Phone 7 or Android, HTC has a couple of handsets to choose from and these are going to multiple carriers around the world – this will surely appeal to the masses. HTC is in a great position to take on the biggest of competition with its upcoming line up, and if the rumored tablet ever materializes, we may see even more saturation from the company in the future.