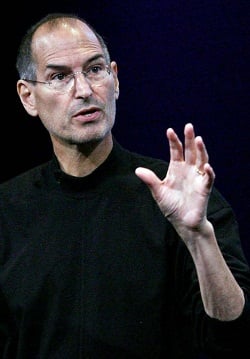 Steve Jobs jumped into the company’s fourth-quarter earnings call today and didn’t sound too impressed with the potential iPad competitors.

The company shipped more than 4.1 million iPad units this last quarter and this was still below what analysts were expecting. Perhaps that peeved Steve Jobs off a bit, as he tore into the potential 7-inch iPad competitors like the upcoming Samsung Galaxy Tab and the Research In Motion PlayBook.

“Given that tablet users will have a smartphone in their pocket, there’s no point in giving up screen size. Seven inch tablets are tweeners — too big to be a phone, and too small to compete with the iPad.”

“The proof of this will be in our competitors pricing, and that’s why we think the current crop of seven-inch tablets will be DOA. Sounds like lots of fun ahead.”

Steve Jobs also pointed out that Google is saying Android 2.2 isn’t optimized for tablets, which should send a strong message to device manufacturers. We expect that to change within the next few weeks with the release of Gingerbread but Steve Jobs may have a decent point.

These strong words from Steve Jobs may indicate that all the rumors of a 7-inch iPad may be false, but this is by no means definitive. He also said that no one wants to watch video on their iPod and that smartphone users don’t need multitasking and both of those features eventually came to Apple products.

Apple’s CEO does like to throw some verbal jabs once in a while and you can be sure we’ll hear something in response soon from Google or Android tablet makers. We can’t wait.

[Thanks to Engadget for transcripts]