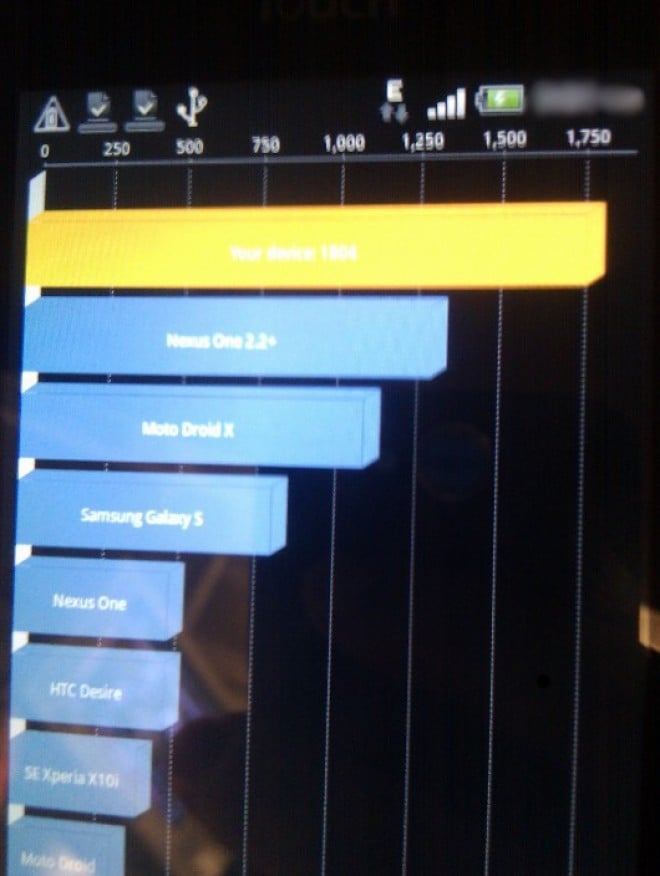 If you’re holding out for the upcoming MyTouch 4G, you may have made the right decision. The upcoming Android smartphone from T-mobile has just been benchmarked, and it flies.

Someone who is lucky enough to get to hold one of these smartphones was nice enough to put the device through its paces by benchmarking it with Quadrant and Linpack. While we’ve seen fast scores with an overclocked T-Mobile G2, the myTouch 4G easily beats the Nexus One with Froyo, without any overclocking required. The Linpack test was less impressive than the Quadrant score, as it received a score of 34.4 MFLOPS, while my not-overclocked G2 hit 33.3 MFLOPS with no problems at all.

The Quadrant (standard) score, however, was more than impressive when it hit a score just above 1800. So right out of the gate it’s kicking some Nexus One ass, as well as pretty much any other Android handset that hasn’t been overclocked. The MyTouch 4G will certainly be a powerhouse of a phone, and may be perfect for the power user who doesn’t need a physical keyboard.

While most specs have yet to be officially confirmed, we do know that the handset will  sport a 1GHz second gen Snapdragon processor, a 3.8 inch display, 5 megapixel shooter with LED flash that records in 720p, front-facing camera for video chatting on either WiFi or data, WiFi, Bluetooth, 3.5mm headphone jack, and the customized Sense UI with T-Mobile optimizations – much like the MyTouch Slide.

Is this the Android you’re looking for?

Telus is prepping their holiday answer to Rogers' Captivate, according to this leaked screenshot of an internal sales portal: the...