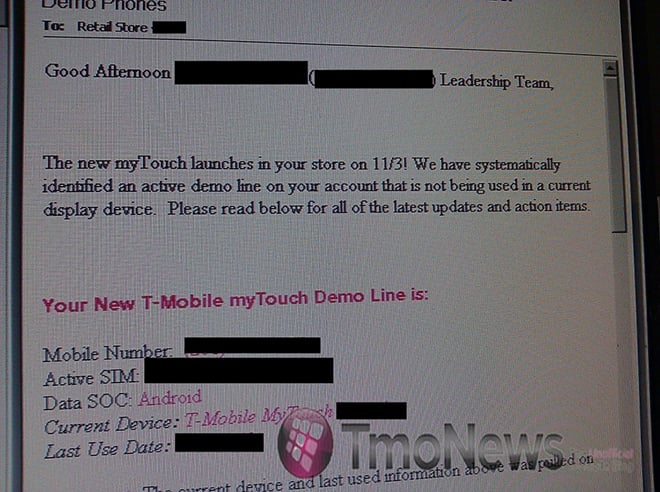 A leaked internal email from T-Mobile enthusiastically points to a November 3rd launch for the highly anticipated myTouch 4g. This Android-powered handset packs a punch with benchmarks that leave even the froyo-powered Nexus One in the dust. While not yet official, the myTouch 4G is expected to include a 1GHz second generation Snapdragon processor, 3.8-inch capacitive touchscreen display, 5-megapixel rear-facing camera with LED flash and 720P HD video recording, front-facing camera for WiFi or 3G video calling, and all the other bells and whistles that are present on a high-end smartphone.

If this date pans out, then myTouch 4G will join the Motorola Defy, the Huawei Comet, and the LG Optimus T in a quadruple-dose of Android handsets slated to hit the shelves of Magenta on November 3rd. The Defy is a rugged Android handset that was outed by Motorola in August and showcased on Oprah last month. The Defy is confirmed to be landing on the 3rd of November with a $99 price tag. Also slated for November 3rd is the Optimus T, an entry-level offering with a 3.2-inch touchscreen display, 600MHZ processor and 3.2-megapixel camera. The Optimus T will debut for a lowly $29.99. Last but not least, we have the Huawei Ideos which will be hitting T-Mobile as the Huawei Comet. The Comet has been spotted in the wild and is another entry-level offering that boasts of a 2.8-inch touchscreen and 3-megapixel camera.

Anyone going to scoop up one or more of these four Android handsets when they touch down at T-Mobile in little over a week?

We're well aware that Best Buy intends to have a rather decent selection of Android tablets available for the holiday...