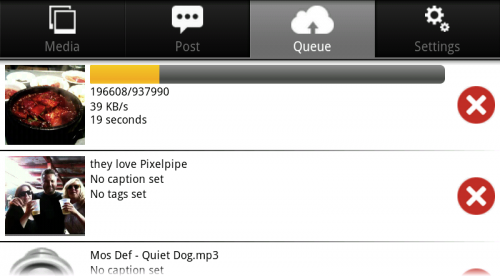 The great picture-sharing application for Android, Pixelpipe, has had a small upgrade to version 2.2.2 which includes the ability to resume interrupted uploads. As soon as the app opens again, the upload will resume right where it left off. Wireless connections aren’t what you’d call a permanent or consistent thing, so this is a particularly great addition to the app. To accompany upload resume, there are new progress indicators so you know how far long those uploads are.

Pixelpipe is an app that started out on Symbian as a great way to shunt out your pictures and video to multiple social networks and blogs all at once.  By setting up “pipes” from the app out to particular networks, you can pick and chose which networks get any given picture, or blast them out to everything if you’re feeling prolific.The number of networks supported is staggeringly huge.  Counting it up now, it looks like they’re up to 101, so no matter where you happen to hang out online, odds are Pixelpipe can help you get your pictures out there.

I find these kind of systems can get messy if you have multiple connections, even with all of the controls in the world. For example, I have my Twitter updates going out to Facebook, which means if I share a picture through Pixelpipe to Facebook and Twitter, my Facebook page actually gets updated twice. So long as you’re mindful of those redundancies, Pixelpipe can be a great way of sharing your pictures without getting defriended for spamminess.

Photographers should hit up the link below to download Pixelpipe in the Android Market.

Garmin and Asus are calling it quits next year, and that may allow Asus to revisit Android to make a...