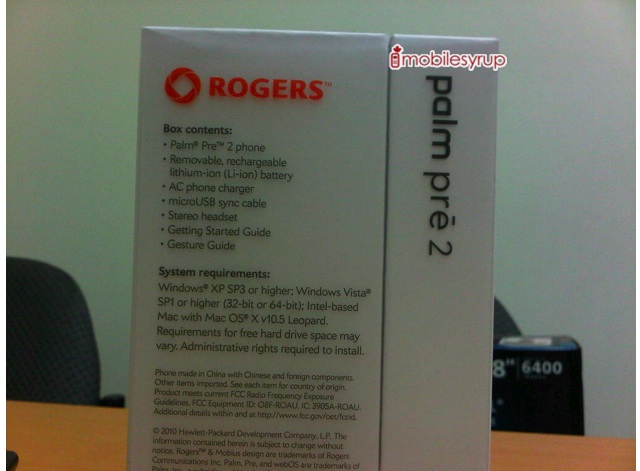 Although Rogers nor Palm have said anything on the record about offering the recently-announced Pre 2 (even in light of some poorly-spelled comment code within a Palm site), some shots of the phone’s retail box and the device itself running on Rogers pretty much seals the deal. Attached with the fresh pictures is a highly-tentative November 9 launch date and $99.99 on-contract pricetag. I guess Bell’s exclusivity on the Pre brand has long expired. The Palm Pre 2 has only gone official with Verizon so far, but we’re expecting an AT&T launch as well at some point.

As far as specs go, the Palm Pre 2 is a solid, if incremental upgrade on the Pre Plus, bringing a faster 1 GHz processor to the table, upping the camera to 5 megapixels, replacing the plastic screen with glass, and running a new version of webOS with revamped multitasking and Flash 10.1 support.

Although it’s not quite the explosive webOS tablet we were expecting Palm to pump out now that they have HP’s help, it does remind us that the platform is still alive despite a negligible market share. As far as I’m concerned, that’s a good thing, because as crowded as the world is with smartphone operating systems these days, webOS has a charm and lineage to it that few others can boast. Besides, rumour has it there’s a whole tonne of new webOS hardware right around the corner…