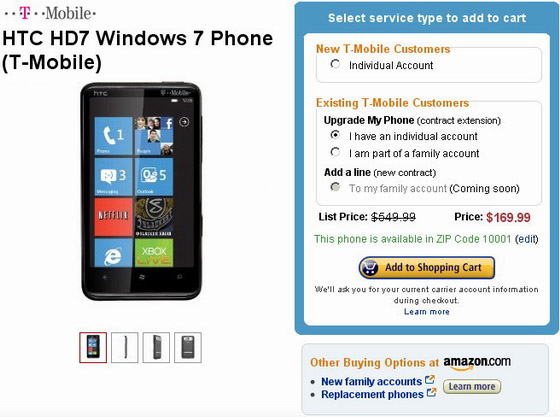 We know T-Mobile USA will launch the HTC HD7 on November 8th asking for no less than $199 for the all-touchscreen Windows Phone 7 device. The good news is that you can grab it for less if you hurry and pre-order your unit today.

Two online retailers, Amazon and Wirefly, have started accepting pre-orders and they offer the HD7 for $169 and $149, respectively. Alternatively, if you don’t like carrier agreements, you can also get the phone sans any contracts signed. Amazon will charge you $549.99 for the privilege, while Wirefly wants $20 less.

As you may know, the kickstand-equipped HTC HD7 will be T-Mobile’s first Windows Phone 7 device, rocking that super-large 4.3-inch WVGA capacitive touchscreen, HSPA and WiFi connectivity, 5-megapixel camera with dual-LED flash, GPS, Bluetooth and 8 or 16 GB of internal storage. The carrier already offers the HTC HD2, which is pretty much the HD7 in the “Windows Mobile 6 world.”

Boost Mobile, which as you know is a Sprint-owned company, is teaming up with Best Buy to offer the Samsung...