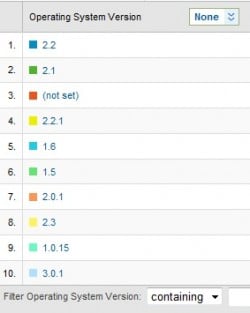 As Android Gingerbread and Honeycomb launch windows near, we are beginning to get more and more information on the latest and greatest Android features to come out of Google. From confirmation of Gingerbread being version 2.3, to Google adding their very own Gingerbread man to the Googleplex, these new Android versions are on their way. Most recently, versions 2.3 and 3.0.1 have started pinging websites, signaling that these builds are being tested on live devices as we speak.

We’re happy to see that Gingerbread has been spotted, and we’re very excited to see that 3.0.1 (Honeycomb) has been found as well. That said, we’re not necessarily surprised. Rumors have indicated that Honeycomb will follow Gingerbread shortly after the launch of the Android 2.3 update. After seeing both versions hitting up the web, though, I wouldn’t be surprised if Google announced both versions at the same time. Gingerbread will be on phones and tablets alike, but Honeycomb may be exclusive to tablets.

So, what would be the smartest thing Google could do when announcing the new versions of Android? Announcing a Nexus Two and Android tablet, of course.

Yes, that’s all speculation for now, but it would make a lot of sense if Google wanted to make a splash. In either case, Android has already made quite the splash in the market, and Google may not feel the need to launch a Nexus Two. Still, releasing another device under the Nexus name and a tablet running Honeycomb certainly couldn’t hurt. If this does turn out to be true, and a Nexus Two lives, I will be kicking myself for believing Eric Schmidt and buying a G2— maybe.

I can only hope that we’ll get a leak sometime soon, if the release is still months away, but we remain hopeful that it’s only going to be a matter of weeks before we get a real introduction to the newest versions of the fastest growing mobile operating system around soon.

As the days go buy, the leaks keep coming, and we can’t wait for a taste. How are you holding up, fellow Android fans?