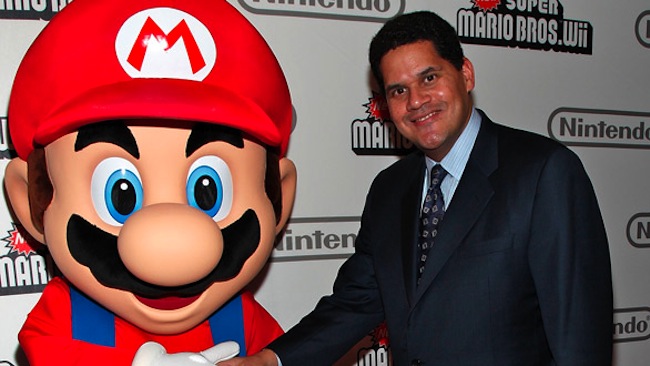 Seems like another chapter in the ongoing saga of Nintendo commenting on Apple’s recent domination of the mobile gaming industry is upon us. If you recall, earlier this year, Nintendo of America’s previous VP of Sales & Marketing Cammie Dunaway during an interview said Nintendo wasn’t concerned with Apple taking a bit of their mobile gaming pie as the Nintendo DS was still selling strong compared to Apple’s iPhone.  Then, Nintendo’s President Reggie Fils-Aime downplayed Apple’s role in mobile gaming as, according to data he’s seen, iPhone owners may constantly be downloading apps, but the games that are available on the iPhone don’t keep the attention of the gamer compared to the amount of game time Nintendo DS owners get.

Now that you’re caught up with the drama, it looks like Reggie Fils-Aime is now saying Nintendo should be considering Apple more of an immediate threat than Sony and Microsoft. During an interview with Forbes, Reggie had the following to say regarding Apple:

Do I think that in the near term they can hurt us more than Microsoft? Absolutely.

Reggie goes on to solidify the fact that in the long-term, content is what is going to decide who will win in the mobile gaming ring. Reggie made sure to share 14 of the top 20 selling games of this current generation have been Nintendo titles.

I honestly believe there’s a market for both types of devices. The iPhone makes a great mobile gaming device, but there are some games that are only available on the Nintendo DS that I absolutely need to play. Reggie is right on that part, Nintendo does produce solid titles. The issue is that most of the time when I’m on the go heading out to a meeting or event, I always have my iPhone and never my Nintendo DS.  The only time I ever bring my Nintendo DS along for the ride is when I know it’s going to be a long trip.  In that aspect, it seems like the iPhone is a better gaming companion than the Nintendo DS just by convenience alone.  So until Nintendo decides to create their own Nintendo DS phone, I’ll just have to keep bringing my iPhone everywhere I go.

Gmail users who prefer the web client on the iPhone or iPod touch have some new changes to look forward...