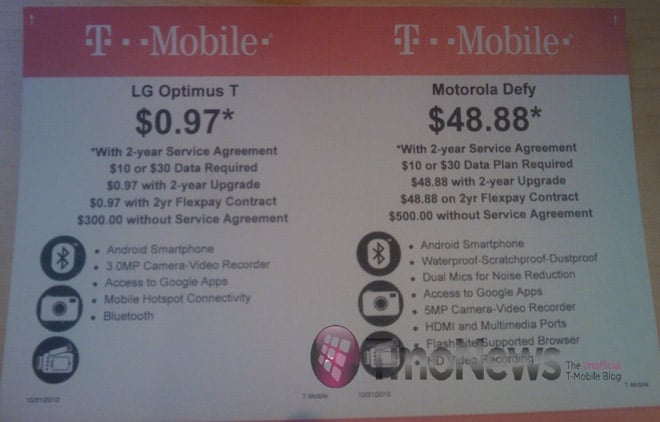 Walmart is offering two Android smartphones on T-Mobile for less. The first one is the LG Optimus T, which already could be yours from the operator for $30 bucks. That deal by itself is not bad at all, but Walmart’s price of $0.97 is even better.

The second phone is the rugged Motorola Defy, which the mega retailer is selling for just $48.88. The original price on T-Mobile is $99 — again pretty affordable for a device such as Defy.

But wait, there’s more. Both phones are available for both new AND qualifying upgrading customers. In other words, if you’ve been looking to “upgrade to Android” and your carrier contract is about to expire, Walmart is one of the places worth looking at. Hopefully, they’ll be also adding deals from other carriers to eventually have something for everyone. In the meantime, make sure to check out mobile phone booth(s) next time you’re shopping for groceries (or whatever) at Walmart… 😉