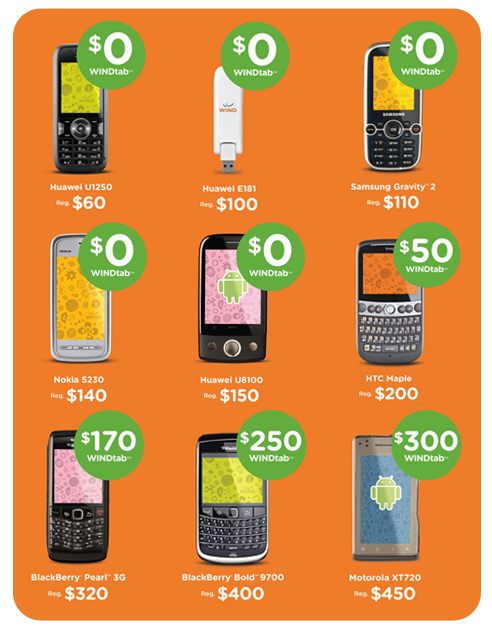 Wind has just announced a new plan option called WINDtab, which lets you knock off up to $150 from the initial handset cost which you instead pay over time on your monthly mobile bill. Your bill doesn’t even go up, Wind just applies 10% of what you’re paying to the tab. So, if you’re paying $50/month, you’ll get $5 knocked off your WINDtab every month. That means if you took the whole $150 subsidy, it would be paid off in 30 months, or two and a half years (unless of course you terminate your service early and want to square up then).

Also, as a part of the announcement, Wind confirmed that they would be getting the BlackBerry Curve 3G as speculated, along with the LG dLite, Alcatel OT-9810A, and Huawei U3200.

Virgin and Koodo already do this kind of thing, though Virgin’s tab goes as high up as $00, depending on the phone. Still, it’s good to see tabs come to Wind, especially since they don’t have contracts and the initial price of some of the nicer handsets may put off some buyers. Personally, I think this kind of a system is a nice medium between affordable handsets with long-term commitments and expensive phones with no strings attached. On top of that, it gives the power to the buyer to decide just how much more they’re willing to pay each month versus right away.

It looks like Bank of America and Citigroup are looking to ditch the archaic and dinosaur of a smartphone that...