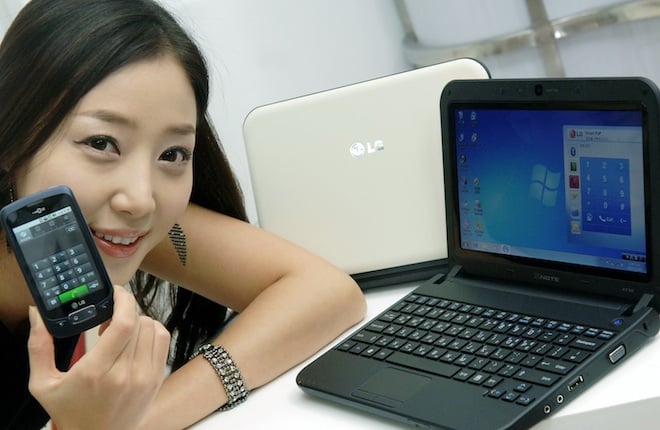 LG lauched a new netbook in South Korea that’s your typical run of the mill Intel Atom based 10.1 inch toy computer, but what’s special about it is that it comes with Bluetooth 3.0 and an application dubbed “SmartPOP” that allows you to control your mobile phone while it’s resting comfortably in your pocket. If that concept sounds familiar to you, then you obviously remember the Palm Foleo. Before netbooks hit the mainstream, and way before the Apple iPad, Palm tried to release a “smartphone companion” known as the Foleo. You paired the Foleo with your smartphone and then all of a sudden you now had a full screen and keyboard to interact with all the data on your handset. In today’s cloud connected world that seems like a step backwards, but for many people such a product category sounds absolutely brilliant.

Nokia also tried something similar to this, albeit much more complicated, with their Mobile Web Server (MWS) application/service for Symbian devices. Once installed, and activated, you could use any web browser to log onto your mobile phone and interact with the data it contained. It also let you publish an RSS feed that your friends and family could subscribe to so when you snapped new photos they would show up in a standard feed reader.

LG’s “SmartPOP” idea isn’t new, and it probably isn’t the best implementation of how Bluetooth 3.0 can effectively be used, but it does point to a future that I hope will become reality sooner rather than later. We’re already seeing HTC offering services so that users can do roughly the same things, mimicking Nokia’s MWS, and many Apple users are waiting for the Cupertino company to make MobileMe actually useful, so expect to read about services like this much more often as vendors try and make their devices more friendly and easier to use.

When phone manufactures make camera phones, they've got to deal with limitations in size, shape, and weight, which is why...