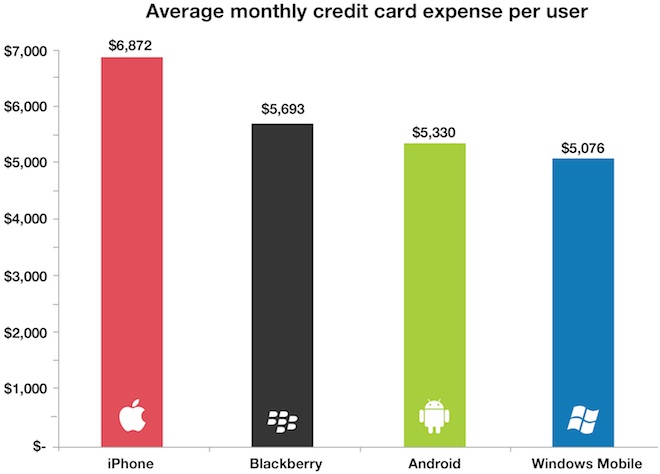 They say you shouldn’t judge a book by its cover, and I’m ashamed to admit that I used to profile people based on what type of mobile phone they carried. Seems like I might have been right all along because data collected by personal finance service Pageonce shows that an average iPhone users charges around $6,872 to their credit cards every month, whereas the typical Android user does only $5,330. In between iPhone and Android owners are the BlackBerry crowd with $5,693 spent per month, and in last place are Windows Mobile users with a mere $5,076. Now I don’t, and probably never will, own a credit card, so these dollar amounts frankly shock me.

There’s also an interesting paradox about how much one spends on their mobile phone bill. The results are almost backwards, with a Windows Mobile user spending about $205.33 a month to use all the features on their handsets, followed by Android users with $196.64 per month, BlackBerry users with $194.35 per month and in dead last are iPhone users who on average pay $164.91 per month. The sample size used for all this data was fairly large too, including 5,000 users of the Pageonce service per platform.

I’m not saying these numbers are wrong, because statistics are statistics, but who in their right mind spends over $6,000 per month and close to $200 just on their phone bill? Where are these people? Am I just ultra frugal? Now you know, if you’re ever in a bar with your friends and one of them has an iPhone, then you should insist that he picks up the next round.

Do you use any mobile finance services to keep track of what you spend? Nickel and dime-ing your way through life doesn’t seem that useful to me, especially if I was spending that much money, so maybe in the long run these guys save something up for their retirement fund.

Update: Turns out PageOnce’s data refers to the credit card balance carried by the average smartphone user across the platforms mentioned above. The numbers don’t refer to charges per month, but the balance that each user carries at the end of their monthly billing cycle. My bad.

As Opera promised last week, they've now released a beta of their Opera Mobile 10.1 browser for Android. Since they're...