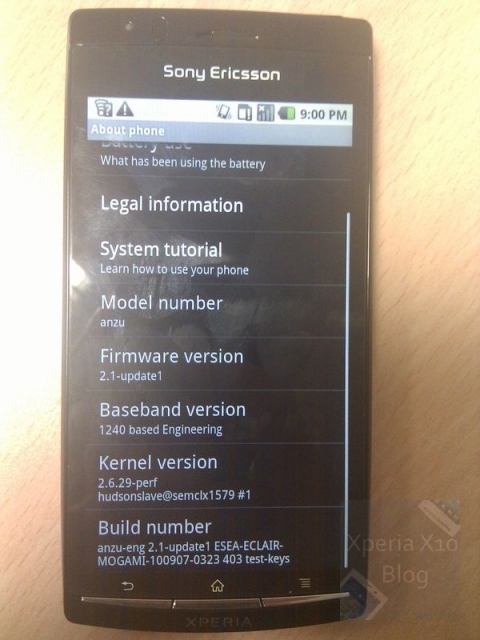 After releasing a couple of teeny devices, like the X10 Mini, Mini Pro, and X8, it looks like Sony Ericsson is going back to big with their Xperia brand. The X12 (code-named Anzu) has a 4.3 inch touchscreen and currently runs Android 2.1 Eclair, but will go to market with Android 2.3 Gingerbread. Hard specs are scarce, but it has a forward-facing camera (likely to support video calling that will be introduced in Gingerbread), HDMI-out, and the rear camera will be able to record 1080 HD video. You can tell from the profile shot below that this will be one super-slim device, though most of the other styling is pretty much identical to the X10. There’s also the possibility that Sony Ericsson will brand this phone as Bravia rather than Xperia – an interesting choice, considering we haven’t heard about that brand in mobile for a long time. If the screen is as good as the tipster says it is, maybe the name will be well-deserved.

Between the X12 here, the PlayStation phone, ditching Symbian and picking up Windows Phone, Sony Ericsson has a hopeful 2011 ahead of itself. Sure, it took awhile for the X10 to get 2.1, but it seems like now that Sony Ericsson has gotten the hang of Android and the dust has settled from their big restructuring, they’ll have an easier time continuing with the platform. One can only hope that they don’t stumble in the same way with their upcoming Windows phones, especially given how many other manufacturers are going to be competing on that OS.

The source of the leak said that the Anzu will hit the market Q1 2011, and you better believe that we’ll be watching for it. Are there any Xperia X10 owners out there who are itching for an upgrade like this?

We mentioned the ZTE Peel for the iPod touch just a few days ago possibly landing at Sprint on November...