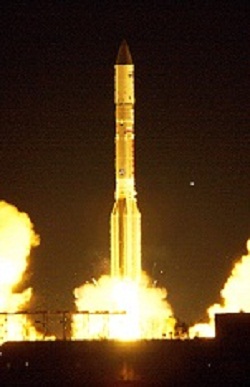 Remember LightSquared? The company is planning to roll out a 4G LTE network in 2011 and it has just launched its first satellite to get the ball rolling.

The company won’t be competing directly against Verizon, T-Mobile or Sprint when it comes to 4G services directly at consumers, as the LightSquared 4G LTE network will be resold to other companies. It’s kind of like the MVNO model we used to see with companies like the ill-fated Helio.

“Today, LightSquared has achieved a major milestone in the realization of our mission to revolutionize the wireless industry in the United States,” said company CEO Sanjiv Ahuja in a statement. “LightSquared is launching the world’s first truly integrated satellite-terrestrial network, combining our 4G-LTE terrestrial network with ubiquitous satellite coverage that will connect rural America and support emergency communications.”

As for the satellite itself, LightSquared said:

The satellite, a Boeing 702HP built by Boeing Space and Intelligence Systems, is designed to provide wireless mobile services to millions of subscribers. LightSquared’s SkyTerra 1 satellite features a 22-meter L-band reflector-based antenna — the largest commercial antenna reflector to be put into service

The LightSquared satellite launch does show that we are truly entering the next generation of mobile data networks. Sprint has been offering its WiMax service for more than a year now and it has the EVO and Epic to take advantage of it.

Verizon is making a big push with its 4G LTE network and it plans to blanket this out to 110 million users by the end of the year. We’re still waiting for word on pricing and availability but that should be coming soon.

T-Mobile is also offering its HSPA+ network and labeling it 4G because it can deliver up to 21 Mbps download speeds. The T-Mobile G2 and the myTouch 4G can use this high-speed mobile data network. AT&T plans to roll out LTE in 2011.